Activists in Action: A look back at 2017 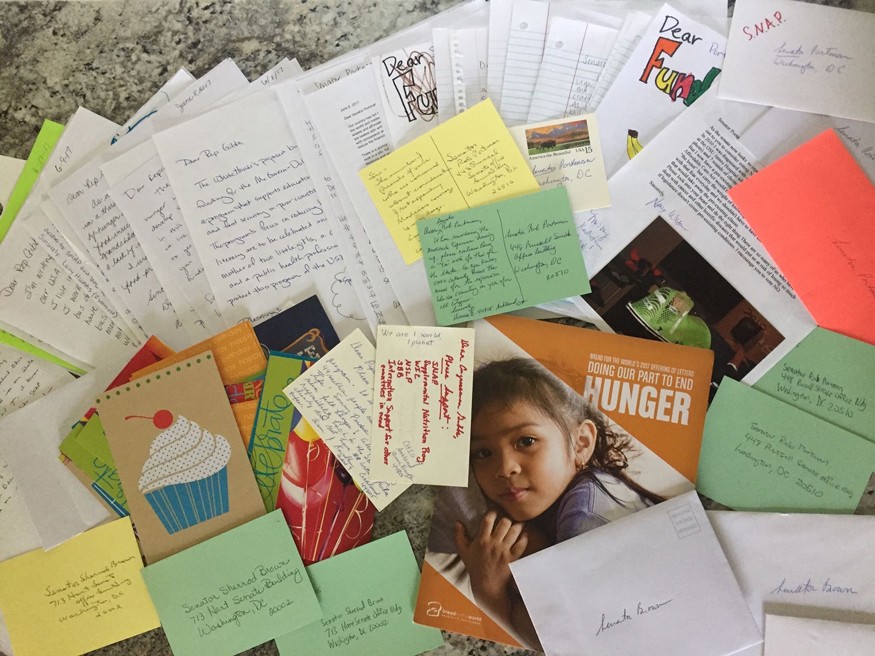 Doing Our Part to End hunger

Bread leaders faced a challenging year in 2017 but can look back with great pride. Smart strategies that layered targeted advocacy efforts throughout the year helped beat back several dangerous proposals that would have drastically cut or transformed anti-hunger and anti-poverty programs. Hard work even helped increase funding in key programs. Below are just a few highlights as we look back at a year of advocacy.

Bread teams follow-up on 2016 election work. Activists from Orlando to Seattle meet with freshman legislators — a tactic that helps build strong relationships with local offices and pays throughout the year.

February: Launching the Offering of Letters

In response to proposals in Congress that would decimate vital anti-hunger programs, Bread activists mobilize to stop Medicaid cuts, and faith leaders across the U.S. sign on to letters to protect lifesaving foreign. Lloyd Schmeidler and the North Carolina team hold their 5th annual convention, “Raising our Voices to End Hunger.”

Minnesotan Janet Humphrey calls her member of Congress about the urgent need for additional famine funding and is delighted to learn it works. The 2017 spending bill passes with most domestic and international funding intact, but also includes an additional $1 billion in famine relief.

Over 400 activists flock to Washington, D.C., for Bread’s annual Lobby Day. Kayla Jacobs and Sue Swedler carry 5,400 letters from the Roman Catholic Diocese of Joliet in Illinois to Washington, D.C. Ohio’s Emily Huestis delivers birthday cards to her Rep. Bob Gibbs (R-Ohio-07) in a creative tactic that pays off with an in-district meeting in August.

After months of mobilizing to save Medicaid, Bread members celebrate as the Senate votes down a bill that would cut health care for millions of low-income people. In-district advocacy continues; Frances Moore stops by a town hall to thank her member of Congress, Rep. Jeff Fortenberry (R-Neb.-01), for supporting international affairs funding.

August: A Month of Meetings

Bread members use the month-long recess to publish numerous letters in local newspapers and meet with over 35 members of Congress and their staff about anti-hunger issues. Eileen Sleva and the Oregon team facilitate a pantry visit to demonstrate growing need and to make it clear that their churches are already doing all they can to combat hunger. In South Carolina, Bread member Susan Stall talks about foreign aid over lunch with Republican Sen. Lindsey Graham.

September: A Second Win for Medicaid

For the second time, Bread members celebrate the failure of a bill that would have cut Medicaid by $1 trillion dollars. In-district work continues; New York members deliver over 700 letters in person to Rep. John Faso (R-N.Y.-19) on the budget. In Ohio, Emily Huestis leads a group to Rep. Bob Gibbs’ office to ask him to cosponsor the Dream Act of 2017.

Linda Leonard-Woods and Bread’s Florida team pitch in to help deliver food to migrant workers in Florida in the aftermath of Hurricane Irma. Relationships forged in January bear fruit. Indiana members thank Republican Sen. Todd Young for his role in bringing attention to the humanitarian crisis in Yemen.

On the heels of the disappointing passage of a harmful tax bill, Bread member Dawn Pierce tells mic.com about her journey through the recession and the safety-net programs that helped her keep hunger at bay. The tax bill now sets the stage for deep cuts to anti-hunger programs in 2018 and will pose a challenge in the year ahead—a challenge Bread members are well-equipped to face.

Smart strategies helped beat back dangerous proposals that would have cut anti-hunger programs.