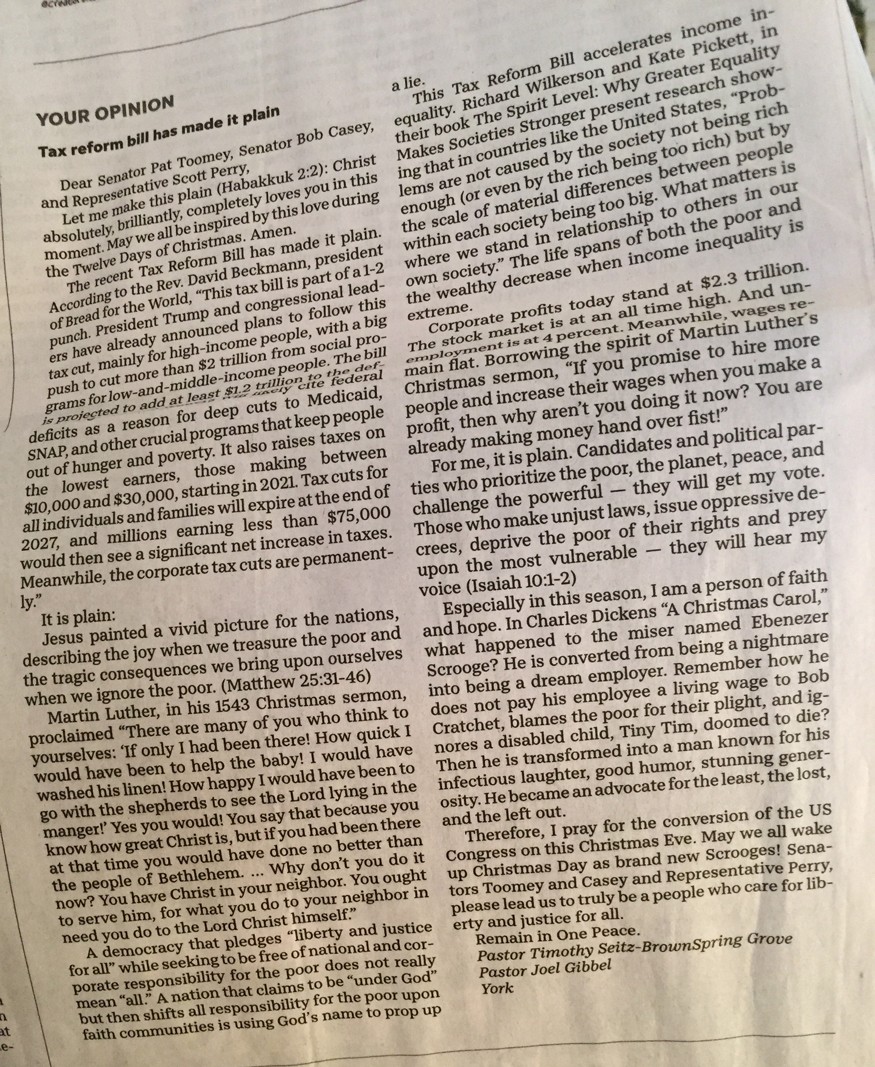 Pennsylvania pastors Tim Seitz-Brown and Joel Gibbel did not mince words when writing an open letter to their members of Congress in the Hanover Evening Sun titled, “The tax reform bill has made it plain.”

“For me, it is plain. Candidates and political parties who prioritize the poor, the planet, peace, and challenge the powerful — they will get my vote. Those who make unjust laws, issue oppressive decrees, deprive the poor of their rights and prey upon the most vulnerable — they will hear my voice. (Isaiah 10:1-2)”

The tax bill, which was signed into law shortly before Christmas, sets the stage for cuts to anti-hunger programs in 2018 and will pose a challenge in the year ahead. People of faith are not letting the moment go unmarked. One of the best ways to get a member of Congress’ attention is to publish a letter to the editor, expressing either disappointment or gratitude, in a local news publication as Seitz-Brown and Gibbel did.

"The tax cuts pose a real threat to the programs that we care about," said Eric Mitchell, Bread for the World's director of government relations. "If we want to avert deep cuts, our grassroots will need to use every tool they have to make a lot of noise. We need to be clear that votes for legislation that increases hunger will have consequences."

As moral leaders, Seitz-Brown and Gibbel let their members of Congress know that unjust actions result in more than just losing a constituent’s votes in God’s kingdom. Citing Matthew 25:31-46, the pastors write, “Jesus painted a vivid picture for the nations, describing the joy when we treasure the poor and the tragic consequences we bring upon ourselves when we ignore the poor.”

Margaret Tran, who leads organizing efforts in Pennsylvania, says that letters to the editor and op-eds help let members of Congress know that Bread members are not only relevant, but have a public voice. She hopes more activists will tap into their passion and put pen to paper.

“It’s such a joy to work with Pastors Tim Seitz-Brown and Joel Gibbel who are always ready for the next move as advocates,” Tran said.  “When the tax bill passed, they were fired up and ready to write!”

For help and tips about writing a letter-to-the-editor in your local paper, contact your Bread organizer or email organizing@bread.org.

One of the best ways to get a member of Congress’ attention is to publish a letter to the editor.