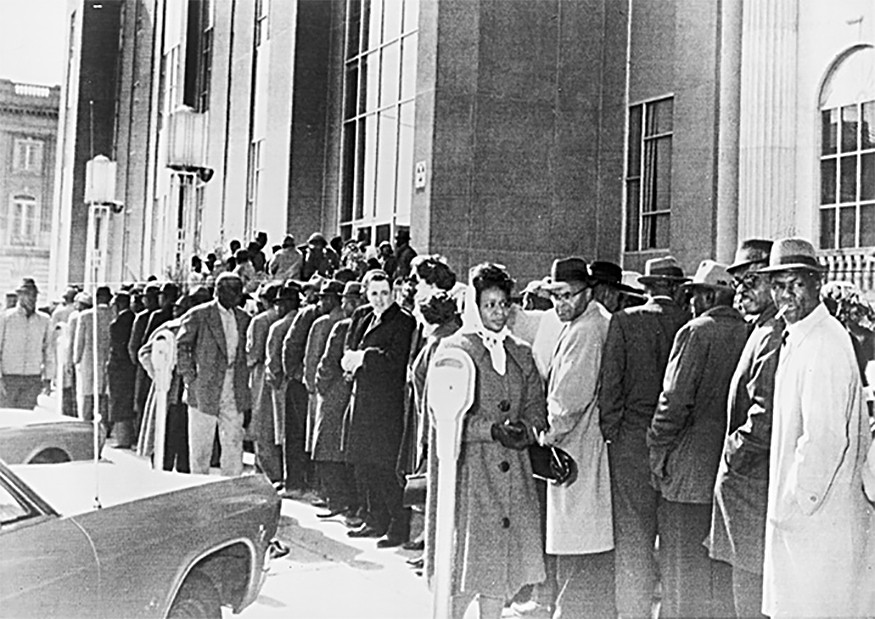 This year, Bread for the World celebrates Black History Month with the theme of voting, elections, and public policy. Ending hunger by 2030 requires that people in the United States immerse ourselves in this year’s election issues; educate ourselves, our community, and our candidates on public policies; and vote for candidates who have committed to end hunger in a way that acknowledges its root causes, including structural racism.

After attaining the right to vote, African American men became very active in public policy. Between 1869 and 1883, 16 African Americans served in the U.S. Congress, and almost 2,000 African Americans held public office at state and local levels. The struggle for voting rights reached another peak in 1963 and 1964, when Dr. Martin Luther King, Jr. and hundreds of others organized and led protests against discriminatory laws and practices.

This shows us that African American communities have historically understood and prioritized the importance of participating in the public policy process. As we reflect on the contributions of hundreds of thousands of African American leaders, known and unknown, seen and unseen—let us celebrate how many people in our country can participate in the upcoming presidential elections because of their unwavering commitment and steadfast leadership.

But let us also be reminded of the values of leaders of the distant and recent past—the value of full freedom. African American leaders fought, and continue to fight, for the ability to be free. Freedom from racial oppression, freedom from being barred from voting, freedom from being unable to care for one’s family and not experience hunger. Full freedom.

As we honor their legacy and contribution to elections and voting, let us also emphasize key public policy changes that still need to be made to secure full freedom. Using a racial equity lens, Bread for the World Institute analyzed how the top presidential candidates are promoting freedom through their positions on key topics that continue to exacerbate U.S. hunger, including a shortage of good jobs, poverty, and a deeply flawed criminal justice system. On the whole, the candidates have not prioritized a key component that could simultaneously garner full-fledged freedom and help end hunger— structural racism.

In honor of Black History Month, and in celebration of the heroic leadership of many African Americans from the 1700s to present day, Bread for the World Institute encourages you to do what these leaders were determined to do—immerse yourself in the elections and educate yourself, your community, and the candidates on ways they can prioritize racial equity in their policies, with the intention of ending hunger and delivering freedom.

For more on the history of voting rights, elections, and public policy, read page 33 of the Policy Packet in the Racial Wealth Gap Learning Simulation.

Marlysa D. Gamblin is domestic advisor for policy and programs, specific populations, at Bread for the World Institute.

Ending hunger by 2030 requires that people in the United States immerse ourselves in this year’s election issues.