By Jennifer Gonzalez and Puja Basnet

Sitting in a conference room in Republican Sen. Johnny Isakson’s office in Washington, D.C., long-time Bread activist Elaine Davies pulled out a photo of a mother in a wheelchair with her 13-year-old daughter getting food out of boxes provided by a nonprofit organization in Macon, Georgia. She showed the photo to the senator’s foreign policy advisor and informed her that the family was living on $900 a month.

“As a person of faith, I think we can do better,” Davies said.

Justino Moreno, a Bread activist from Florida, told two staffers in Republican Sen. Marco Rubio’s office that his family benefited from food assistance during hard times. And at the same meeting, Tiffany Kelly, talked about being impacted by her family’s generational poverty and how having access to food assistance gave her the opportunity to pursue higher education and eventually land a well-paying job.

“If I did not have that program, I would’ve spent a chunk of my time trying to find food to eat instead,” she said.

These were some of the voices, more than 300 strong, that descended on Capitol Hill last week as part of Bread for the World’s 2018 Advocacy Summit and Lobby Day. The two-day event kicked-off with Latino and Pan-African Bread members convening the day before Lobby Day. On the eve of Lobby Day, Bread members were treated to a dinner and legislative briefing.

The annual Lobby Day event is an opportunity for Bread members to put their faith into action and urge their members of Congress to support legislation that will end hunger by 2030.

But before activists headed to the halls of Congress, they spent time in morning worship at St. Mark’s Episcopal Church in Washington, D.C., where Rev. Lori Tapia said: “We have been called to transcend in a time such as this. When the moral compass of our nation is broken, and in some cases lost altogether, we cannot sit by and let people hunger.” 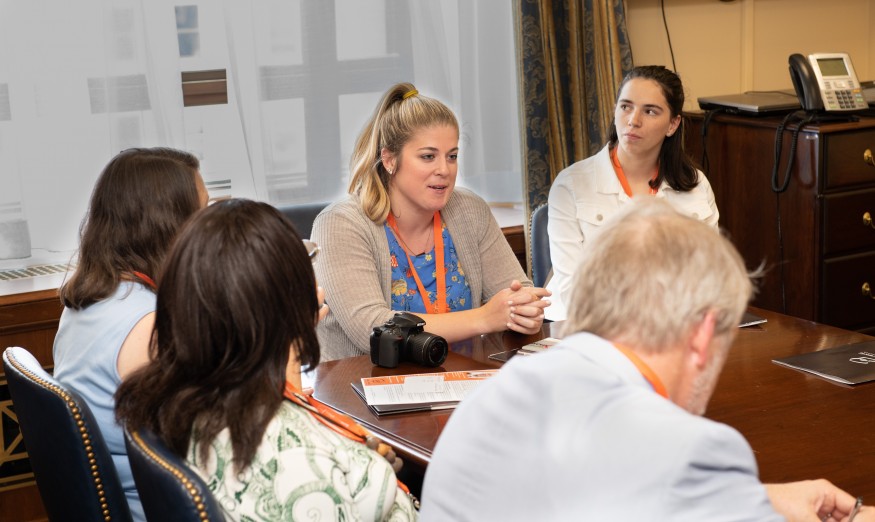 Getting the job done

After worship, Bread members spent time caucusing with others from their state to strategize how they would speak to their members of Congress.

Sometimes the job was pretty easy. For instance, Rep. Jamie Raskin, a Democrat, who met personally with a small group of Maryland constituents in his office later in the day, said he would co-sponsor the GFSA and do what he could do to push the legislation forward.

Other times it was a bit harder. Nevertheless, everyone persevered.

Some Bread activists came from across the country. A group from California had its meeting in the hallway outside the office of Rep. Mimi Walters, a Republican. A pastor in the group said he felt compelled to make the trip in the hope that the representative would support a bipartisan farm bill.

A group of young adults from the Center for FaithJustice in Lawrence Township, New Jersey came to experience advocacy first-hand. One of their first stops was to visit with staffers from the office of Sen. Cory Booker, a Democrat.

“We brought them to lobby day to really understand advocacy work and hopefully to make some type of impact or difference,” said Maggie Smith, manager of special projects and WorX programs at the Center. “I like to think our program puts a name and a face, to demonstrate that there are actually people that have stories and it’s about coming to know them and building relationships.”

She added: “Bread for the world is great because you guys kept reiterating to share your story and share how faith influences you.”

During her meeting with Democrat Rep. David E. Price, Dr. Kathleen Shapley-Quinn, of North Carolina, thanked the lawmaker for co-sponsoring the GFSA. She also relayed a story on the impact of the GFSA.

“My daughter served in the peace corps, working with an organization that was treating people for HIV,” said Shapley-Quinn, a family physician. “When we went to visit her, we met a woman who would collect wood and sugarcane and walk many miles to the market to sell them. She would make two trips a day just to get enough money to buy food for the next day. Seeing the sparseness of life from that level makes GFSA have so much potential.”

After the Hill visits, Bread activists made their way to the Rayburn House Office Building for a reception and worship celebration. During the reception, U.S. Reps. Alma Adams, a Democrat from North Carolina, and Will Hurd, a Republican from Texas, were honored with awards for being champions against hunger. Sen. Todd Young, a Republican from Indiana, received his award earlier in the day when he met with Indiana constituents in his office.

Sen. Jeff Merkley, a Democrat from Oregon, was not able to attend the reception and will receive his award at a later date.

The evening ended with several people giving witness about their lobby day experience. Daniel Erdman stood up and said he left a meaningful photo with his representative. It was an old photo of him and his friends in Mexico sitting near powdered milk from the Food for Peace program.

He shared how he has been working on food aid for a long time. “I’m not going to quit,” he said.

Jennifer Gonzalez is the managing editor at Bread for the World. Puja Basnet is a summer communication intern at Bread.