How to save $160 billion every year This morning, with Thanksgiving on the horizon, Bread for the World Institute launched its 2016 Hunger Report, The Nourishing Effect: Ending Hunger, Improving Health, Reducing Inequality. Speakers at the launch, held at the National Press Club in Washington, D.C., highlighted the impacts of hunger and food insecurity on both Americans’ health and U.S. healthcare costs.

I’ve been working in hunger advocacy for a number of years, and today seemed to be one of those rare days that usher in a new sense of common purpose. People coming from different professions and points of view — from officials of government agencies to leaders of health groups to frontline healthcare workers — were speaking in concert. Their message: Hunger carries staggering yet completely avoidable costs, and we urgently need new thinking and new partnerships to help end it.

The economic costs are striking: Hunger and food insecurity added at least $160 billion to U.S. healthcare costs in 2014. To me, the human costs are even more inconceivable. Focusing on health gave Bread for the World Institute new insights into the lives of people who struggle to put food on the table. We knew that the end of the month – before payday arrives, and before safety net benefits such as SNAP (formerly food stamps) are replenished – is a time of skipped meals and longer lines at food pantries. At the launch, Debra Eschmeyer, executive director of Let's Move! and senior policy advisor for nutrition policy at the White House, reinforced this point with medical facts: At the end of the month, there is also a spike in hospitalizations due to complications of diabetes, a disease whose management depends heavily on having access to the right foods.

Even more stark was Eschmeyer’s statement that people who are food-insecure consume 10 percent to 20 percent fewer calories at the end of the month than at the beginning. Is this “my” country, where millions of people routinely live on 400 fewer daily calories during the last week of every month? Many low-income countries have “hunger seasons” before the next harvest is ready. With vastly more resources, the United States nevertheless has “hunger weeks.”

The Institute’s president, David Beckmann, talked about hunger in terms of lives. Babies’ lives. If the United States reduced its infant mortality rate to a level that is even average for developed countries, he said, we would save 100,000 infant lives every year. If a terrorist attack killed 100,000 of our people, the country would be at war, he pointed out. Is this “my” country, where tens of thousands of babies die every year in large part because their families lack access to health care and sufficient healthy food?

“My” country does not have a tradition of apathy – and this morning’s speakers made it clear that people are not sitting idly by as hunger and food insecurity continue to damage human lives. Acacia Salatti, director of the Center for Faith-based and Neighborhood Partnerships at the U.S. Department of Health and Human Services, offered partnership examples, such as a nutrition program in New Mexico for the siblings of children hospitalized for hunger-related reasons. Dr. Sarah Jane Schwarzenberg of the American Academy of Pediatrics mentioned training for new pediatricians in understanding and responding to food insecurity, one of several AAP initiatives under its FACE Poverty advocacy campaign. Just two of the many other signs of hope: Hospitals are beginning to take a prevention-oriented approach to their "community benefit" responsibilities (see p. 77 in this link), and groups of advocates all over the country (for example, see p. 84) are chipping away at the problem.

My take-away: Expanding awareness to health care professionals and others beyond our existing advocacy community, and encouraging their creative solutions, will help “my” country finally put an end to hunger.

Photo: The launch featured two panels of speakers. The second panel, pictured here, featured experts who confront hunger in their health-related professions, from a nurse to an academic at a medical school. Joseph Molieri/Bread for the World 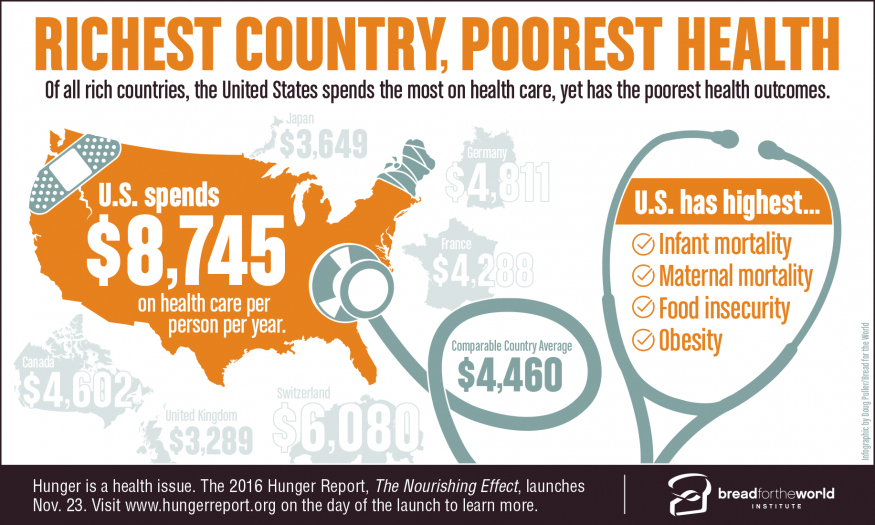