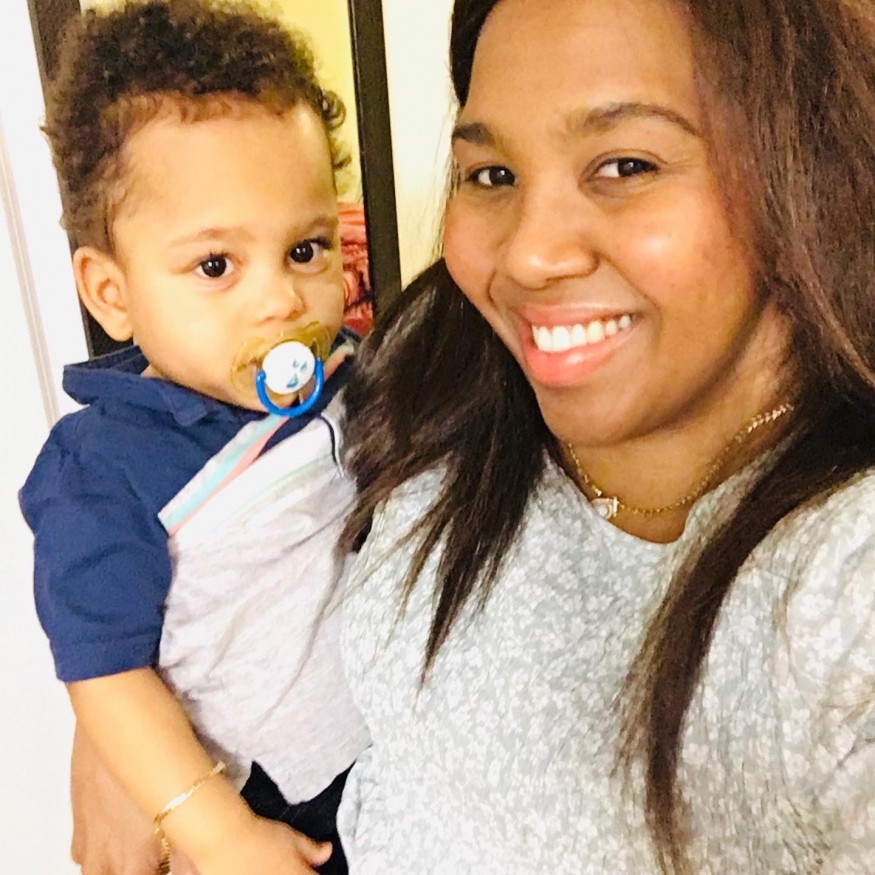 Living through a global pandemic takes resilience. Flor Abad knows a little something about that. She lives in New York City – the epicenter of the pandemic in the United States.

Every day, Abad awakens in her first-floor Bronx apartment where she has been holed up since mid-March to begin her day. She continues to work as a case manager and food pantry coordinator for Catholic Charities Community Services – albeit, remotely. She also tends to her son who needs special care following his premature birth at 29 weeks.

“I feel that I am being able to cope with the pandemic as a New Yorker because I am a woman of faith, hope,” says Abad, 34, a single mother. “I believe that if you trust God, he will give you peace and strength to keep going.”

In a strange twist of fate, Raymond’s early entrance into the world prepared Abad for life in a pandemic. “When he came home, he came with a feeding tube and oxygen,” Abad says. In order not to compromise his health, Abad had to employ many of the same tactics used today for safeguarding: rigorous handwashing, not touching his face with her hands, and social distancing. Visitors were not allowed in the apartment at one point.

“I had hand sanitizer all over the house, “ she says.

When she would get home from work, she would quickly change out of her clothes and take a shower before tending to Raymond.

Persisting in the new normal

Abad says she became anxious when she learned that the New York’s lockdown would continue until May 15. Opening the window blinds and letting the sun come in helps. Abad says it gives her a sense of freedom and peace.

“From my window, I can see the people passing by,” she says.

Caring for her son keeps her motivated as well as her work with Catholic Charities. Abad says that the number of families accessing the food pantry has increased. Before the start of the pandemic, the pantry served around 110 families were per week, she says.

The number is now between 140 and 150 families per week. “People seeking assistance is growing every day and I feel that after the quarantine there will be more need for food, “ she says. “I feel that a lot of people are not coming out because they are afraid, despite needing the food.”

Abad also helps clients apply for SNAP benefits. She says the demand for SNAP has increased as people have lost their jobs. She said SNAP is more important than ever for families, especially since vulnerable children can no longer access school meals.

In her case manager role, she is calling clients – mostly seniors – to schedule food deliveries. However, the work has proved challenging since meeting face-to-face is no longer possible. Abad says some of the seniors are hesitant to confirm their address over the phone. Instead, they would rather go to the food pantry site to verify their information, which they cannot do because of the lockdown.

Regardless, Abad is working hard to place orders and communicate with food recipients. “I love helping people,” she says. Abad, who has a bachelor’s degree in social work, has worked with Catholic Charities for seven years.

Life for Abad these days is a juggling act between working and parenting. Her son requires occupational, physical, and speech therapy. All are conducted via telehealth. Abad manages administrating those therapies to her son while also responding to work emails, making phone calls, and doing other work for the agency.

The nights are the best. That is when Abad reads to Raymond or they sing songs together. There is prayer and then it is bedtime for both mom and son. “It’s hectic, but I am making the best out of it,” Abad says.

Abad says it wasn’t until after she became a mother that she realized how hard it must be for a parent not to be able to feed their family. If anything, Abad hopes that this pandemic is showing people how interconnected we are as a society.

“Alone, we cannot do this,” she says. “We have to be there for each other. It’s the only way.”

Tell Congress to boost SNAP benefits by 15 percent to ensure the vulnerable populations in the United States have access to the resources they need.

Jennifer Gonzalez is the managing editor at Bread for the World. Information for this story was compiled by Margaret Tran, is a senior regional organizer at Bread.

"I believe that if you trust God, he will give you peace and strength to keep going.”