Who, me? On St. Matthew’s Day, let’s do as he did and follow the call 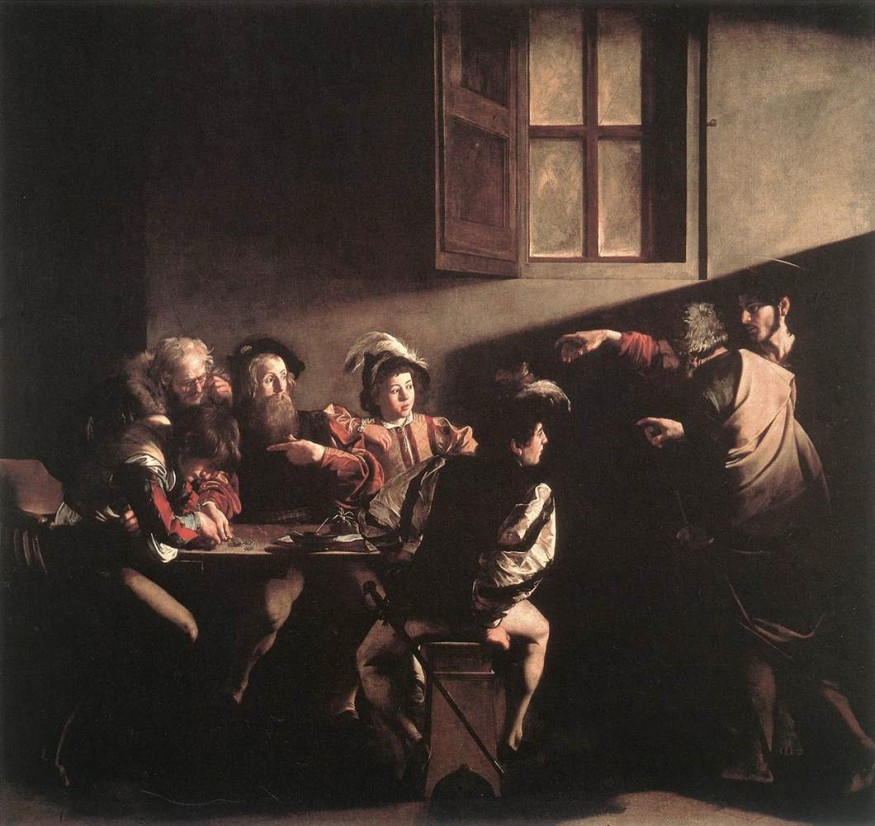 As Jesus was walking along, he saw a man called Matthew sitting at the tax booth; and he said to him, “Follow me.” And he got up and followed him.
— Matthew 9:9

When Jesus was filling his cabinet of disciples, he didn’t always choose from the most admired, prominent, or upstanding citizens or business leaders of the time. Most of them would not have gotten congressional confirmation in our day and age. Some were despised because of their profession, while others were ordinary, working-class people, like fishermen.

Take Matthew, whose saint day we celebrate today. Before Jesus recruited him, Matthew was a tax collector, working for the Romans, the occupying empire of Jesus’ day. Tax collectors were known to be corrupt because they kept some of the money they collected for themselves.

Going from that to being in Jesus’ inner circle is an amazing turn of professions and reputation. Matthew ended up having the first of the Gospels named after him.

In 1599-1600, Caravaggio captured that moment of Jesus calling Matthew. The Italian painter depicts a stunned Matthew being picked out of a group of friends. “Who, me?” he seems to be asking as Jesus points to him.

Tonight, before Pope Francis arrives for his first visit to the United States tomorrow, Bread for the World is hosting a gathering of prominent faith leaders in Washington, D.C., to consider another call — how to respond to one of the biggest issues of our time — ending hunger and addressing poverty in our world.

Bread wants its member denominations and other faith-related groups to help push our federal government to change priorities between now and 2017, so that our next president and Congress put us on track to end hunger and extreme poverty in our country and around the world by 2030.

Bread’s president, David Beckmann, will give remarks at the summit of faith leaders. The Caravaggio painting is one thing he will refer to when speaking to the national faith leaders, who will come from Christian, Jewish, and Muslim traditions. “I suppose that most of us sometimes feel like Matthew — surprised that God is using us as religious leaders. But by God’s mercy, we were drawn into relationship with God and, over time, chosen as leaders within the U.S. faith community,” Beckmann’s prepared remarks say.

We don’t all have to be the head of our denomination or a prominent member of the clergy to be a leader or even to take action. Jesus’ call is to all of us. You have already been chosen by Jesus to be a disciple. And whether you work for the IRS or are a fisherman off the New England coast or are a teacher or fast food worker, you can do your part to end hunger. You can join Bread and the faith leaders this week who will pledge to end hunger by 2030. “Who, me?” you may still ask. "Yes, you," Jesus says.

Stephen H. Padre is the managing editor at Bread for the World.