Virginia church welcomes all to 'The Table' 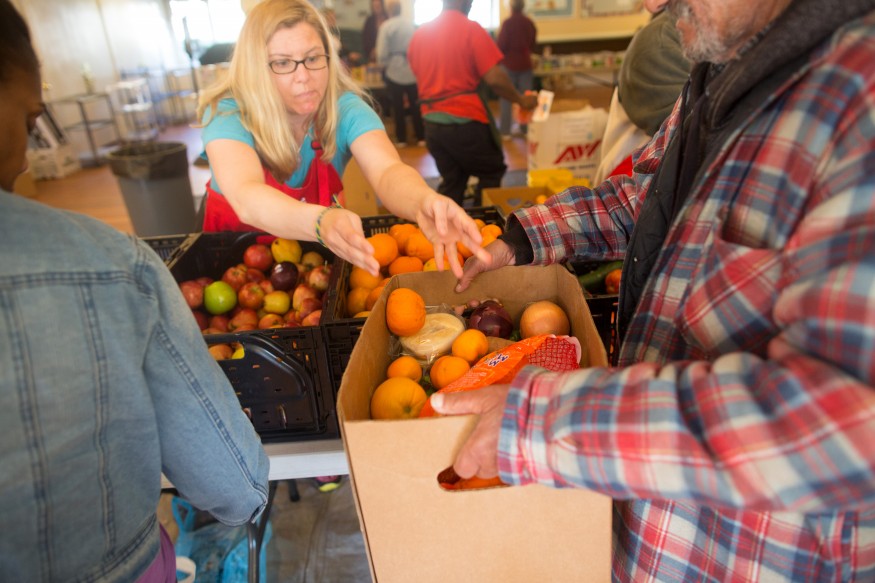 Recently, I, along with Bread for the World's multimedia manager, Joseph Molieri, spent the day at a unique food pantry run by St. George’s Episcopal Church in Fredericksburg, Va.

We went to visit the food pantry as a way to see how the issue of hunger is addressed on the ground. Many of the churches Bread works with do a lot of work around feeding the hungry and poor.

At most food pantries, the food is canned, boxed, or jarred, and clients are normally given a pre-assembled bag or box of food to take home.

Not at St. George’s.

At The Table (the food pantry’s name) there are no clients, only “shoppers.” The food pantry is set up in a way that allows shoppers to choose their groceries like they would at a supermarket or an open-air food market. The food pantry is open every day, and shoppers can visit either in the morning or afternoon.

Unlike a more traditional food pantry, The Table offers shoppers fresh produce, such as potatoes, apples, oranges, squash, broccoli, pears, and onions. Fresh bread, such as rye and wheat, is also available.

The food comes from local farms, donations, and the local food bank. St. Gregory’s also gleans from other places, such as convenience stores, for food they can provide, such as sandwiches.

Started in 2012, The Table is the brainchild of Rev. Deacon Carey Chirico, director of outreach ministries at St. George’s. She wanted to create a space where struggling people could shop for food with dignity and respect.

“It’s very much our belief that when we come forward to receive the Eucharist as Episcopalians, we are setting down all our own assurances,” Chirico said. “We are setting down any privilege we have. That there is nothing that makes us unique in receiving this beautiful, beautiful gift. So we try to do the same thing at The Table – approach each other on a person-to-person basis.”

“We’ve tried to really let go of ‘we have, you don’t; we give, you take,’” she said. “And we encounter each person as we are treated at the Eucharistic table.”

The uniqueness of St. George’s food pantry was not lost on me. When I left St. George’s that day, I wondered if there were other food pantries doing the same thing. I got my answer last week when I came across a New York Times article that focused on this idea of the “customer choice pantry” and how some food pantries across the country were converting to this new standard.

The idea is rooted not just in providing dignity to the shopper, but also offering more nutritious food, such as fresh fruits and vegetables. A lot of the packaged food given out at food pantries is not healthy.

This is important given the fact that many families who utilize food pantries are already facing health issues. In fact, 58 percent of households who use food pantries nationwide have a family member with hypertension, and more than 30 percent include someone with diabetes, according to Feeding America.

Historically, St. George’s food pantry began as an emergency food pantry – giving grocery bags filled with food to families in crisis. But Chirico said that set-up really wasn’t working. “We realized that we were not meeting a lot of people’s needs. We were not giving them food that was culturally appropriate or nutritionally sound.”

And so The Table was born after the church found out that people really enjoyed picking vegetables from a garden the church had started. Today, a shopper leaves the food pantry with an average of 25 lbs. of groceries – 60 percent of which Chirico hopes is fresh produce.

Photo: Fresh produce is a staple at The Table food pantry at St. George's Episcopal Church in Fredericksburg, Va. Joseph Molieri/Bread for the World.

Many of the churches Bread works with do a lot of work around feeding the hungry and poor.