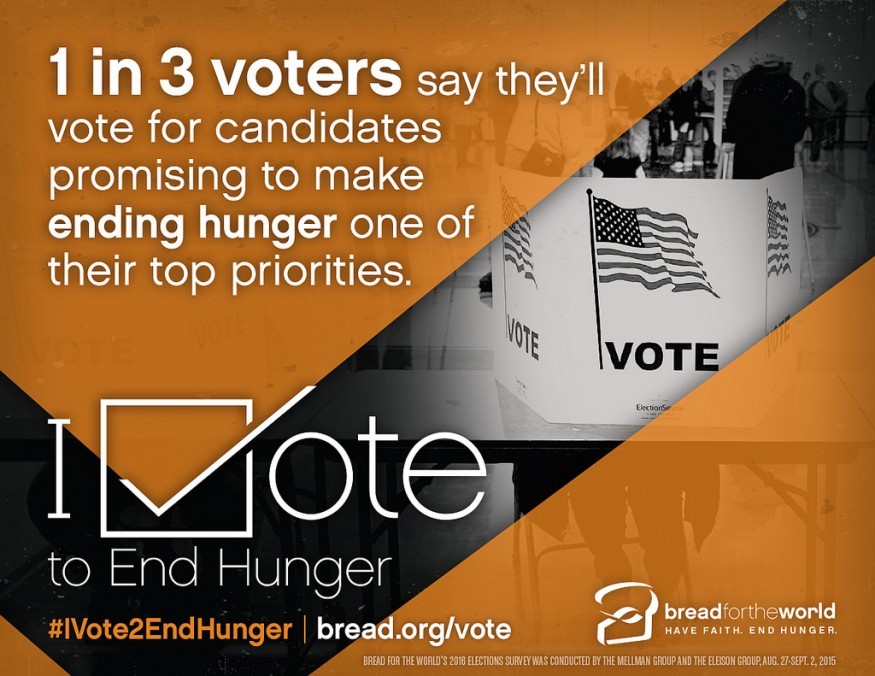 Washington, D.C. – Today, Bread for the World launched its national “I Vote to End Hunger” campaign urging voters to elect a president and Congress who will put the United States and the world on track to end hunger by 2030. Bread also unveiled its 2016 election platform, which focuses on steps leaders can take to end hunger.

“Voting is Christian stewardship,” said Rev. David Beckmann, president of Bread for the World. “Bread for the World is taking this unprecedented action because we want to make hunger and poverty key issues in this year’s presidential and congressional elections. We want candidates to know that we, and millions of others, will vote to end hunger.”

Bread’s grassroots activists are reaching out to voters and congressional candidates across the country, focusing on 12 swing states. The organization is also using digital ads to reach 50 million voters in these same swing states.

Bread is asking candidates: “If elected, what will you do to end hunger, alleviate poverty, and create opportunity in the U.S. and worldwide?” Bread is also working with other groups to ask the question. A recent survey conducted by Bread for the World found that 1 in 3 voters says they will vote for candidates who promise to make ending hunger one of their top priorities.

“We know that ending hunger is possible in our lifetime,” added Beckmann. “But we must elect leaders who will put us on track to do it. Ending hunger isn’t just the right thing to do; it’s politically smart. Helping hungry people is a compelling political issue to voters no matter their religious or party affiliation.”

As a Christian organization, Bread expects presidential candidates Hillary Clinton and Donald J. Trump and all other candidates in the 2016 campaign to act respectfully toward each other, and promote policies that provide help and opportunity for people who struggle with hunger and poverty.