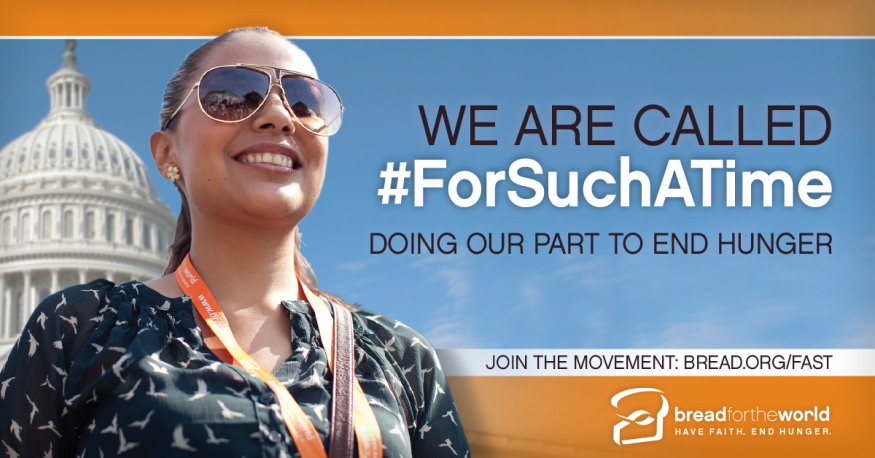 Washington, D.C. – Faith leaders, including the heads of some of the country’s largest Christian denominations, today launched a nationwide, monthly fast to ask God’s help with their advocacy for hungry and poor people. Bread for the World and its partners organized the fast in response to the unprecedented budget cuts proposed by the Trump administration and the 115th Congress.

“From leaked reports we know President Trump’s budget is continuing his big push for unprecedented cuts to programs that are important to hungry people in our country and around the world,” said Rev. David Beckmann, president of Bread for the World. “Like Esther in the Bible, we are well positioned for such a time as this. Fasting together in faith, we ask for God’s help and guidance in challenging attacks on poor, hungry, and vulnerable people.”

The fast, called For Such a Time as This, begins today with a 3-day fast by Beckmann and other local and national faith leaders. It continues with prayer and fasting every 21st day of the month through December 2018, the last month of the 115th Congress.

On May 23, President Donald Trump will release his budget for fiscal year 2018. The budget is expected to contain unprecedented cuts to programs that help poor and hungry people in the United States and around the world. This is on top of the American Health Care Act’s $880 billion cut to Medicaid for low-income people.

“The cuts to Medicaid and the proposed budget cuts to social safety net programs such as SNAP are a double whammy for people who struggle to feed their families,” Beckmann said. “We hope the fast spreads widely, with many people and organizations finding this a helpful way to deepen and intensify our commitment to advocacy.

For Such a Time as This recalls the biblical story of Esther. Esther used her access to the Persian emperor to save her people, the Jews, from destruction. She and her community fasted and prayed to strengthen her commitment to advocacy.

More information about the fast can be found at: