Videos by Presidential Candidates Focus on Faith, Hunger, and Poverty 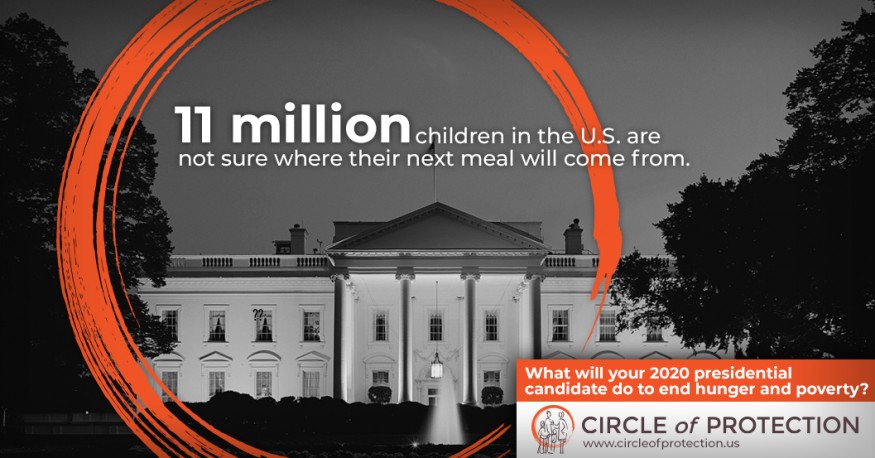 Washington, D.C., December 12, 2019 – More than 50 Christian leaders with the Circle of Protection asked all of the presidential candidates, Republican and Democrat, to send a short video explaining what they “would do as president to offer help and opportunity to poor and hungry people in the United States and around the world.”

The Circle of Protection is a coalition of diverse Christian leaders including leaders from the National Council of Churches, the National Association of Evangelicals, the Catholic Church, major Protestant denominations, and faith-based organizations.

The Circle of Protection and its partners will distribute the candidates’ videos among their churches and the general public. They will encourage people to share the videos with their friends, family, and church and community groups. However, the Circle of Protection will not publicly evaluate the proposed policy positions or endorse any candidate.

This is the third presidential election cycle the Circle of Protection has asked presidential candidates for videos. In 2012, both President Barack Obama and GOP nominee Mitt Romney provided videos. In 2016, nearly all of the primary election candidates made videos, including Hillary Clinton. Clinton and Donald Trump also provided statements to the Circle of Protection during the general election.

The Circle of Protection is a coalition of diverse Christian leaders working together for help and opportunity for hungry and poor people in the United States and around the world.