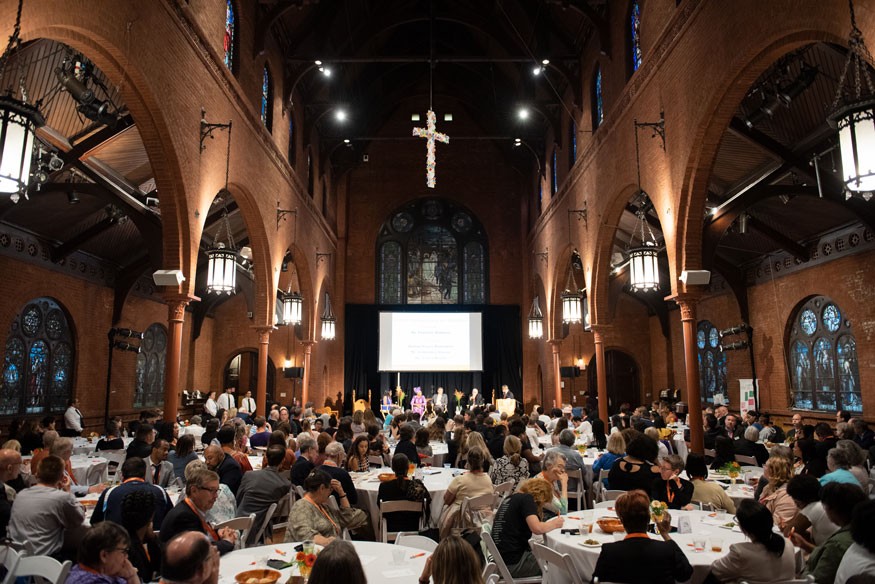 Standing in the pulpit of St. Mark’s Episcopal Church in Washington, D.C., the Rev. Dr. Cynthia Hale didn’t hold back. “If we are honest with ourselves, we know God is not pleased with us.”

She set the tone for Bread’s 2019 Advocacy Summit, which since its inception has embodied both a spiritual and political calling.

“If we want America to change, then we must change,” said Hale, senior pastor of the Ray of Hope Christian Church in Decatur, Ga. “Everyone has a duty to perform justice. Some can feed the hungry, but others can give them a job. We are our brother’s keeper.”

St. Mark’s is a modest red brick church with picturesque stained-glass windows with images of Jesus. A white cross dotted with colorful paper butterflies hung from the rafters. As in previous years, it was the launch point for members to fellowship together before heading out to meet with their members of Congress.

Nearly 400 Bread activists took part in this year’s summit on June 10 and 11—visiting roughly 200 congressional offices. Activists, young and old alike, came from as far as California and as nearby as Maryland and Virginia.

The day before activists descended on Capitol Hill, many attended a reception and a book launch for Rev. Arthur Simon—Bread’s founder and first president. Simon’s latest book, “Silence Can Kill,” argues that working to end hunger can unify our nation.

In addition, during the dinner program Bread activists Edith Avila Olea and Barbara and Rev. Bud Miller received the Rev. Arthur Simon Award for Faithful Service to End Hunger. Earlier in the day, Latino and Pan African Bread activists met to learn from each other and raise their distinct voices against hunger and poverty.

"Everyone has a duty to perform justice…We are our brother’s keeper.”

This year, Bread is asking lawmakers to support a bipartisan Global Nutrition Resolution. The statement is a nod to U.S. influence in stemming maternal and child malnutrition. Bread is also seeking $250 million to fund global nutrition programs in fiscal year 2020 spending bills.

Christine Melendez Ashley, Bread’s deputy director of government relations, said the organization’s enjoyed a series of legislative wins over the years. The most recent was the Global Food Security Act signed into law by President Obama in 2016. The measure was reauthorized in 2018 and helps with global efforts to address hunger.

Without the commitment of Bread’s members those victories wouldn’t have been possible. “They come here just so excited, and I love the energy they bring to the issue,” Ashley said. “Their faith motivates them, and it’s energizing for us in D.C. who do this every day to see that energy across the country.”

Standing a few feet away from Ashley at St. Mark’s was Jasman Roberson, 21, of Knoxville, Tenn. She’s been active with Bread for three years on the campus of Fisk University, a historically black university, where her passion for anti-poverty issues was nurtured at the Fisk Memorial Chapel. “It allows me to speak for people who can’t speak for themselves,” she said. 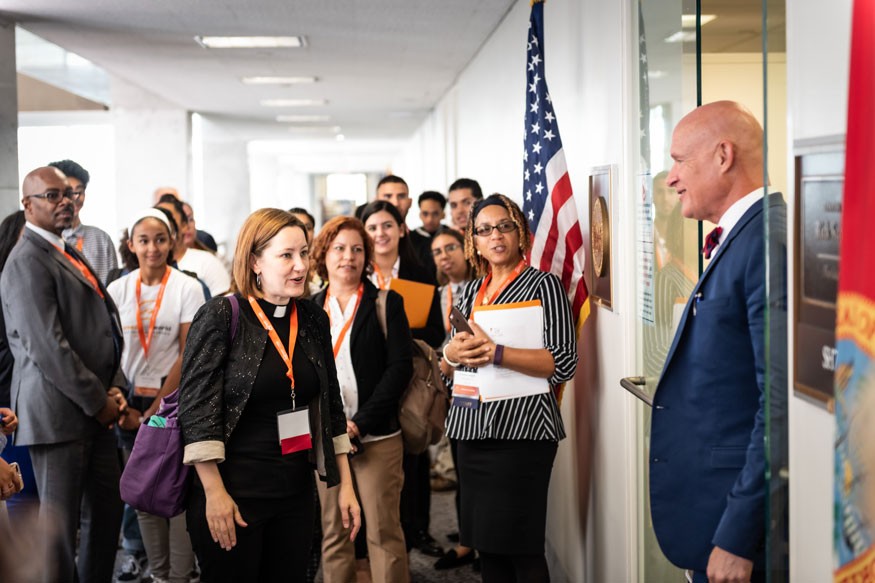 'Charity alone is not enough'

Inside the sundrenched atrium of the Hart Senate Office Building, a group of Bread members were met by a staffer from Sen. Chris Van Hollen’s (D-Md.) office.  They made their pitch on Bread’s initiatives, but it was John Holden, active with Bread since the 1980s, who made an impression. He delivered 45 handwritten letters in support of the organization’s goals. He had another stack of 240 for Sen. Ben Cardin (D-Md.).

“Hunger and malnutrition shouldn’t exist in a world of abundance,” said Holden of Silver Spring, Md. “It affects me deeply when you think about children who don’t have what they need to grow and thrive.”

One of the largest Bread teams was from Florida. Nearly 40 Sunshine State constituents crammed their way into a conference room inside Sen. Rick Scott’s (R-Fla.) office suite. Organizer Florence French introduced the group with a few lines from Bread’s credo: “Charity alone is not enough. We must urge our government to make fair decisions so struggling families can provide for their children. We must change laws and structures that allow poverty to persist.”

Board member Rev. Beth Bostrom followed those remarks by opening the meeting in prayer. Some in the group, who immigrated to the U.S., shared their personal stories with hunger and the hardship it created for their friends and families.

"Charity alone is not enough…We must change laws and structures that allow poverty to persist."

And there was Jafet Rivera, 22, of Gainesville, Fla. He lived in Puerto Caimito, Panama, until age 3. Rivera would have shared his own hardship stories if not for his all-star father, Mariano Rivera, a retired pitcher who played 19 seasons for the New York Yankees.

Instead, the younger Rivera expressed how fortunate he was, and how his father often sends assistance to his hometown for food and education.

“We went on mission trips to Honduras where these kids would wait for the garbage truck to come in because it was a source of food,” he said. “I could have been in that situation. I thank God. That’s why I want to be a part of Bread for the World and bring awareness to the problems of malnutrition.”

Later in the day, Bread President David Beckmann made himself comfortable on a six-foot couch inside Rep. Ted Yoho’s (R-Fla.) office suite. He was hoping to chat with Yoho, who also serves on Bread’s board. Beckmann was seated near Rivera, Fabi Marrero, 17, and Johnathan Oquendo, 20, both from Gainesville.

While Yoho casted votes on the House floor, Beckmann pitched the congressman’s staff on the importance of Bread’s push to increase funding for better global nutrition.

In just 10 years, Peru has cut the rate of children who grow up physically and mentally stunted. “A lot of experts thought stunting was intergenerational,” Beckmann said. “But what we’ve seen is in one family, if the mom gets nutrition assistance for the second child, that child grows much taller than the first child.” 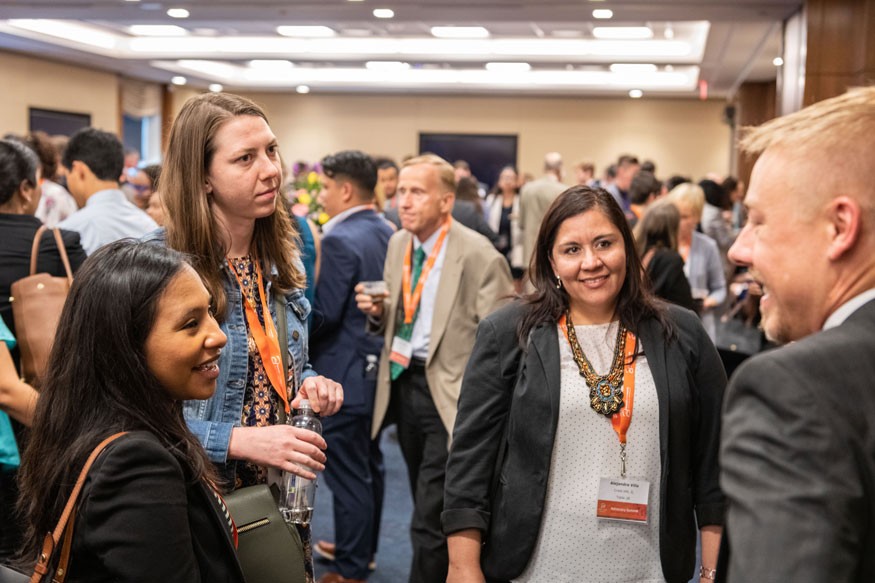 Bread’s advocacy continues to have a positive impact on poverty and hunger issues, but change can’t happen without allies in government. During the Tuesday evening reception and worship, both Sen. Pat Roberts (R-Kan.) and Rep. Michael McCaul (R-Texas), received the Hunger Champion Award for their efforts in support of Bread’s goals. Reps. Marcia Fudge (D-Ohio-11) and Joaquin Castro (D-Texas-20) also received the same award. All spoke during the reception.

“It’s crucial to have champions in Congress on both sides of the aisle, who become ambassadors for Bread’s mission,” Beckmann said. “But they don’t do that on their own. They have to have a lot of people back home who support that, and love that, who encourage that, who vote for them and campaign for them.”

Bread supporter and travel author Rick Steves stepped to the podium to praise the organization for its efforts and plugged an upcoming PBS special, “Hunger and Hope, Lessons Learned in Ethiopia and Guatemala.” Over the years, Steves has raised money for Bread and encouraged others to join the fight against hunger.

After the lawmakers and Steves left and the custodian crew of the Rayburn House Office Building removed the leftover hors-d'oeuvres and tables, a handful of Bread members remained. They ended the day as it began. In worship.

The song leader stepped to the front of the room and sang acapella the first verse of the call and response: “We’re expecting, great things.”

Marc Hopkins is a freelance writer in Silver Springs, Md.