This article was originally published in the February 2013 issue of Bread newsletter. 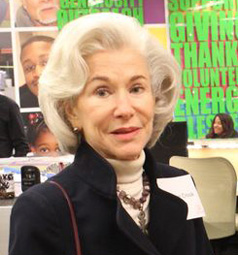 Caring and informed Americans fight hunger in multiple ways. They contribute to food drives, volunteer in food banks and work to ensure that U.S. government programs care for our must vulnerable neighbors. Whether motivated by a deep faith-fueled compassion or by concern over the personal and societal costs of hunger, they do whatever it takes to make sure that kids have the nutrition they need to be healthy, to thrive, and to learn.

The necessity of engaging in both advocacy and direct service was the theme of a recent address of by Bread for the World President Rev. David Beckmann at the Houston Food Bank. Over a year ago, leaders of this food bank, the nation’s largest, invited Beckmann to give the keynote address at their Hunger-Free Houston dinner on Jan. 10. They wanted to ensure that their board — as well as major corporate and funding partners — understand that federal programs provide more than 90 percent of the food resources for hungry people in Houston and across the country. Therefore, advocacy must be an integral part of the work of feeding hungry people.

Among the 150 people who enjoyed a delightful dinner and program in a large conference room at the Houston Food Bank, more than 75 guests were invited by Bread for the World. Some were longtime Bread members. Others were invited by local hosts Dr. Judy Andrews, a member of the Development Committee of Bread’s board, and Jim Shields, a former Bread for the World board member.

Long-time Bread members Eleanor Butt Crook and her son and daughter-in-law Bill and Caryl travelled from San Marcos and Corpus Christi, respectively, to participate in the event. In introducing David from the podium, Eleanor, a former board member, recalled the roots of her family’s hunger activism. Family lore tells of her grandmother loading leftover edible food from their tiny store into the back of a wagon to share with homeless people living under the bridge in Kerrville, Texas. That compassion shaped the generosity of her family’s grocery business as the H-E-B grocery chain grew to rank No. 12 on Forbes’ 2012 list of “America’s Largest Private Companies.” H-E-B donates 5 percent of its pretax profits to charity.

The Butt family, owners of H-E-B, had a formative influence in the early years of both the food bank movement in Texas and the work of Bread for the World. In the 1960s, when Eleanor first heard that a food bank had been started in Arizona, the family helped launch the food bank movement in their state. Eleanor has, in addition, been a leader in Bread for the World since its early days in the 1970s. She has served on its board at three different times for a total of 15 years. She helped to launch the Alliance to End Hunger and now serves on its board. Her philanthropy and advocacy have strengthened Bread for the World over its 38-year history.

Working to end hunger is clearly a priority for Eleanor, her family, and the H-E-B grocery company. Personally and corporately, they model a comprehensive approach that invests in direct food distribution, education and advocacy.

Concluding her remarks, Eleanor said, “Bread for the World is the love of my life…. When the Congress responded to months of intense lobbying by Bread, church bodies, and others by passing the debt relief act of 2000, I closed my eyes and imagined the thousands of school breakfast programs and health clinics made possible.