Chang K. Park, a Bread for the World board member from New York City, is being honored by an international association for the industry he works in – home electronics and technology. He will be presented with this year’s CEDIA Lifetime Achievement Award at the association’s conference on Wednesday in Dallas, Texas.

The award recognizes an individual who has exhibited outstanding, creative, innovative, and visionary leadership in the growth and advancement of the residential technology industry. Nominations are submitted by industry professionals and are evaluated on the basis of achievement and service within the industry.

Park is founder, president, and CEO of Universal Remote Control Inc. (URC). He is also a philanthropist and champion of humanitarian causes including human rights, the elimination of poverty and hunger, and the implementation of political reform and economic justice.

At Bread’s Annual Gala to End Hunger in 2014, Park shared personal stories about his struggle with hunger as a boy growing up in Korea. His family lived through World War II and the Korean War, during which many families lost everything and communities were vulnerable. Families were hungry.

“There were times when my mother would tell us children that she was not hungry when, in fact, there wasn’t enough to eat,” Park said.

He shared a vivid story of his first encounter with the U.S. Agency for International Development and the drums of powdered milk that he and children at his school received to take home to their hungry families.

Park recalled his mother’s words: “There are many forms of sadness in life. The greatest sadness is being hungry and not having anything to eat.”

“It’s hard to express how personal hunger is. Chang Park’s reflection presented the grinding challenge families face when there is no food to eat,” said John Driscoll, a member of the event’s advisory board. “Poverty and hunger can strike anywhere. It involves families and communities. Chang was courageous to share the challenges of his past and, in so doing, articulated the urgency of ending hunger.”

Park came to the United States as a teenager, with just $200 to his name. He earned a bachelor’s degree in electrical engineering from Michigan Tech and a master’s in business administration from the Wharton School at the University of Pennsylvania.

Park first learned about Bread for the World while watching Bread President Rev. David Beckmann speaking on the PBS News Hour in 2011. He said he was struck by Beckmann’s statements about the large and important role of government in alleviating hunger.

As he listened to Beckmann speak, he told himself, “That’s an organization that I want to work with.”

He soon became involved with Bread in a variety of ways. Bread congratulates him on this award and celebrates his achievements both in his professional life and with our organization.

Read more about Chang K. Park in a profile story that appeared in Bread’s newsletter in 2013. 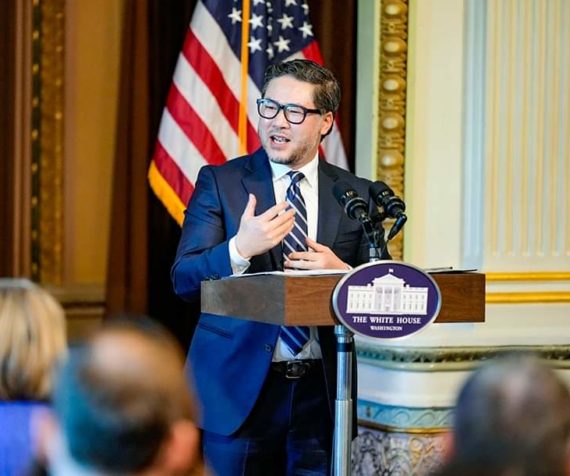