Editor’s note: Bread’s 2016 Offering of Letters: Survive and Thrive focuses on the nutrition of mothers and children in developing countries. Sometimes, however, it’s challenging for Americans to understand the connection between the letters they write to Congress and what happens on the ground in far-away places in the work of ending hunger.

This is a shortened version of an article from the online edition of the May/June 2014 issue of Frontlines, the news magazine of the U.S. Agency for International Development (USAID), which is the focus of the request to Congress in this year’s Offering of Letters.

By Fungma Fudong and Pallavi Dhakal

Married at 17, Meena Gurung from Lamjung district, a remote mid-hill region of Nepal, suffered the loss of her firstborn child without her husband by her side. He, like an estimated 2.1 million Nepali men, had gone abroad to work. Gurung relies on subsistence farming for her livelihood and has little or no access to a variety of diverse and nutritious goods, such as green leafy vegetables and protein, to ensure proper nutrition. As a result, she and her child were malnourished.

A byproduct of poverty, poor nutrition is a major public health concern across Nepal’s rural areas, where about 80 percent of the population lives, and death is all too common.

One out of 19 children dies before his or her fifth birthday due to treatable causes, such as pneumonia, diarrhea, and malnutrition. Over 40 percent of children under age 5 suffer from stunting, a severe form of chronic malnutrition in which a child suffers permanent physical and cognitive damage, resulting in serious health, social, and economic consequences.

“Such nutritional deficiencies mean a whole generation of workers in Nepal with reduced economic potential,” says Shanda L. Steimer, director of USAID/Nepal’s Office of Health and Planning. “For a resource-limited country like Nepal, this has devastating consequences for the country’s socio-economic development and anti-poverty efforts.”

To address this and build a brighter future for Nepal, the Nepal Government developed a five-year nutritional plan of action in 2011 that promotes a lifetime of optimal health and nutrition for mothers and their children. To complement this effort, USAID introduced the Suaahara program, which means “good nutrition” in Nepali, in 25 of Nepal’s most undernourished districts.

A Plan of Action

Suaahara works closely with the government to improve the health and nutritional status of pregnant and lactating women and children under 2. The project integrates nutrition, agriculture, food security and health activities such as small-scale backyard farming; poultry farming; improved child feeding practices; and nutrition, hygiene and maternal and child health care education.

The Suaahara project relies primarily on a cadre of 50,000-plus female community health volunteers and community extension workers to deliver health and agriculture messages and services in communities, many of whom have been trained by Suaahara. Sample messages include the health benefits of exclusive breastfeeding, timely transition from breastfeeding to complementary feeding (solid and semi-solid foods) from 6 to 24 months of age, and washing hands before feeding children.

In just two years, Suaahara has improved food security and nutrition for 74,000 families. The prevalence of exclusive breastfeeding of children under 6 months has increased from 46 to 68 percent, and the number of children between the ages of 6 and 23 months meeting their minimally recommended nutrition intake increased from 36 to 47 percent. 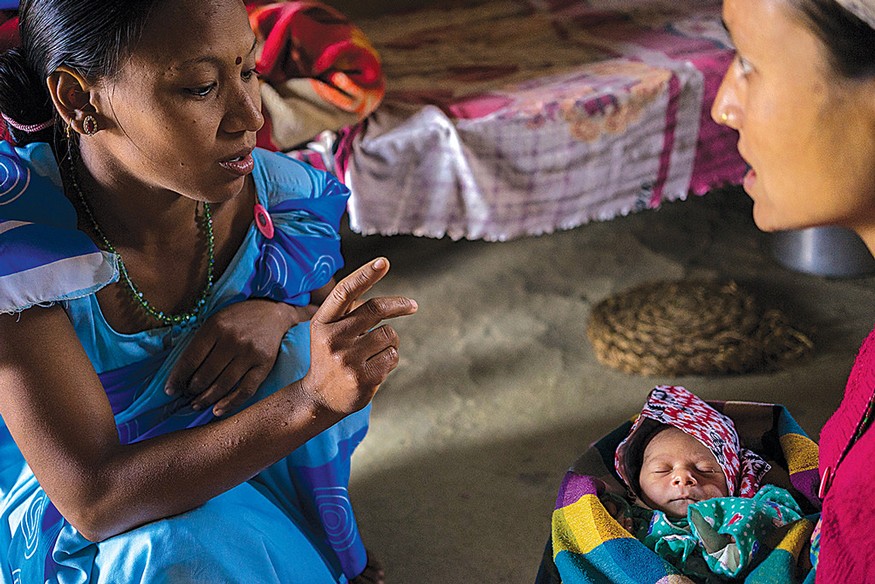 When Gurung gave birth to her second baby, Yushida, she was still unfamiliar with the importance of proper nutrition for infants. In her effort to make her daughter healthy, she started feeding her non-nutritious food such as rice porridge mixed with unclean water at 5 months. Yushida suffered frequent bouts of diarrhea as a result.

Gurung was pregnant for a third time when she met Ram Maya Shrestha, a local female community health volunteer, who was hosting a session in her village for “1,000 days” mothers — those who are pregnant or have children under 2.

“Thanks to the training and constant counseling in the village for pregnant women and new moms, there have been significantly fewer deaths of babies in our village,” says Shrestha.

Recently, Gurung gave birth to a healthy baby girl, Supriya, in a hospital with a skilled birth attendant. She plans to exclusively breastfeed her for the first six months.

“Compared to my elder daughter, Surpiya does not fall sick as often. In my ignorance, I was doing everything wrong while raising Yushida, but thanks to Suaahara training and Ram Maya Shrestha, I have finally learned to do the right things for the healthy development of my two daughters,” says Gurung.

Pallavi Dhakal is with Save the Children.