Child Hunger: 'It is just sinful' 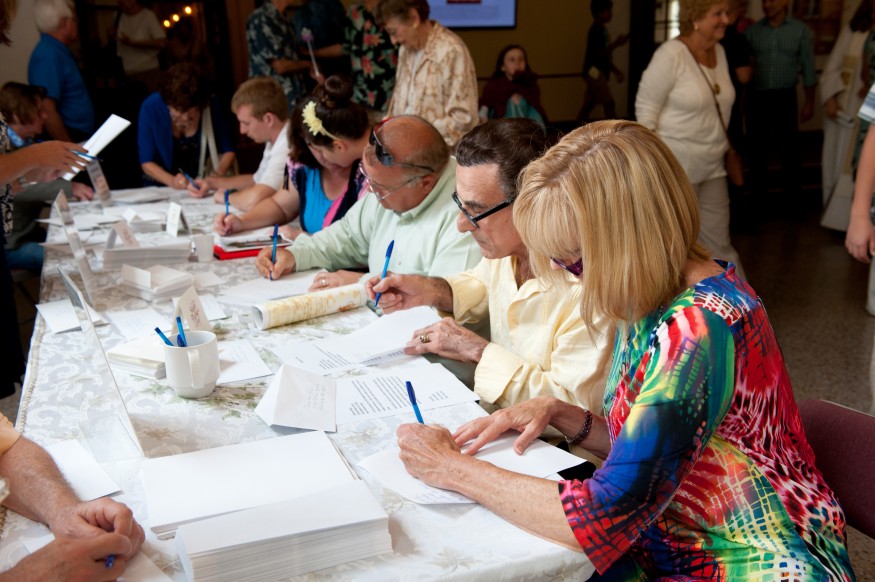 “It is just sinful,” said Raul Hernandez, shaking his head, about the fact that some children in the United States go to bed hungry.

As he made his remark, he addressed an envelope to Sen. Marco Rubio (R-Fla). The envelope would later be stuffed with a letter written by one of the many congregants of the Coral Gables Congregational United Church of Christ in Coral Gables, Fla., taking part in an Offering of Letters on Mother’s Day.

Tables were set up inside the church’s Fellowship Hall, as well outside the church, as a bright sun beat down on congregants writing letters. The idea was to have congregants write letters to their elected officials on behalf of the many mothers who struggle every day to feed their families.

“As a person of faith, I think there is nothing so contrary to God’s will for this world than to have people and especially children be hungry, said Rev. Dr. Laurinda Hafner, the church’s senior minister. “More than anything else, Jesus talked about feeding the hungry, so as members of a Christian congregation it is our faithful and moral imperative to do everything we can to fill the bellies of those who are without food."

Bread for the World’s 2015 Offering of Letters: Feed Our Children is focused on ensuring Congress reauthorizes the child nutrition bill. The legislation is set to expire in the fall. It is vital that Congress hears from their constituents, especially since over 16 million children in the U.S. don’t always know where their next meal is coming from.

The church’s Offering of Letters was a well-coordinated effort, from the pulpit announcement to the near-precision assembly line of letter writing and envelope stuffing. Hernandez, who lives in Miami, was part of that assembly line – addressing envelopes to speed up the process.

Over 100 letters were written to Sen. Rubio and President Obama on Sunday. For Karen Newpauer of Key Biscayne, sitting down to write a letter to the senator was personal. “We are food-insecure right now,” said Newpauer, a divorced, single mom raising three daughters, including daughter Michelle Murcia, 11, who was also writing a letter to the senator.

“I try to shield the kids from what is going on,” she says. Newpauer said children should not be going to school with growling stomachs.

Sometimes you have to write a letter to correct a wrong. That’s the way Virgin Vanderblugt felt about the letter she wrote. She said too often elected officials get into office and begin to think about themselves and not their constituents.

She hopes the letters from her church will make elected officials think harder about the plight of others. “There are a lot of people who are struggling,” she said.

When Victor Tejera of Miami sat down to write his letter, he thought about the children he encounters every day as a school social worker – many who are hungry. Tejera said he connects students and their families with government services if they qualify. If they don’t, he “gets creative.”

He said he taps into his faith and nonprofit communities contacts to connect struggling families with services such as a local food pantry. He said he knows that his letter alone won’t have much of an impact, but he hopes that the sheer volume of letters elected officials receive will make enough of an impression to ensure that hungry kids get the food they need.

Sometimes you have to write a letter to correct a wrong.