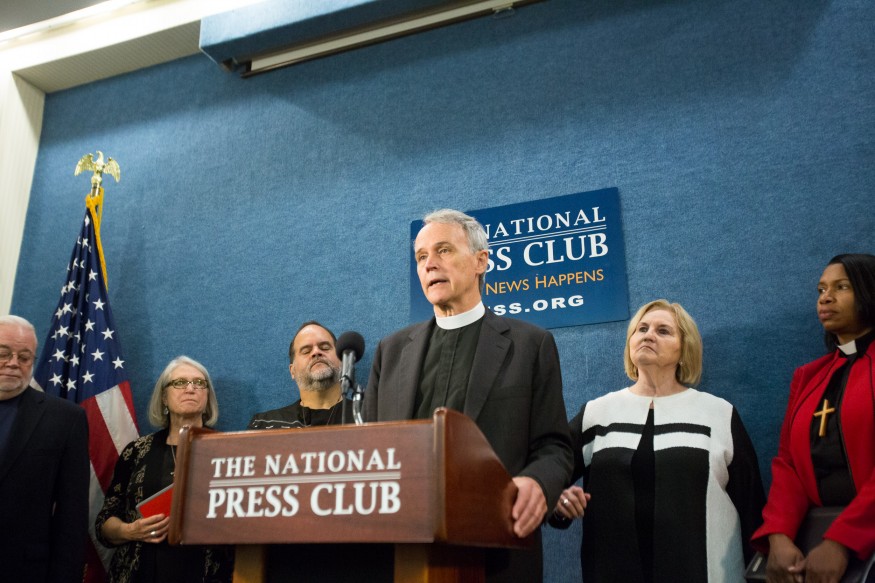 Christian leaders from across the theological and political spectrum at a Wednesday press conference at the National Press Club in Washington, D.C., expressed their condemnation of President Trump’s fiscal year 2018 budget proposal.

Their message was simple: The budget was amoral at best and cruel at worst.

It was the first time that the Circle of Protection - a broad coalition of leaders from all the families of U.S. Christianity who have come together around the biblical mandate to protect poor and vulnerable people - has responded to the ongoing budget debate. The administration’s fiscal year 2018 budget calls for a $610 billion cut to Medicaid, and that’s on the top of the $880 billion already taken from Medicaid in the American Health Care Act (AHCA).

Speakers offered stern statements as to why as Christians it is their duty to oppose deep cuts to programs that would hurt hungry and poor people. Rev. Sharon Watkins, chair for the National Council of Churches, put it simply, repeating three times: “This budget makes American children go hungry.”

Watkins said she condemned cuts to SNAP because it would increase hunger and sickness in children, and also cuts to international assistance in a time of “four famines of biblical proportion.”

Currently, 20 million people are at risk of starvation in famine or near-famine conditions in South Sudan, Somalia, Yemen, and Nigeria.

Lt. Col. Ron Busroe, national community relations and development secretary for the Salvation Army, expressed his concern for cuts to domestic aid. The cuts, he said, would lessen the ability for the Salvation Army to provide mortgage assistance, addiction counseling, housing, and food, among other programs. “The Salvation Army provided 28,000 beds last night,” Busroe said. “And will serve 25 million people this year.”

Medicaid has become central to the debate over repealing and replacing the Affordable Care Act or Obamacare. Medicaid cuts by the House-approved AHCA and the administration’s proposed budget would result in health insurance taken away from 14 million low-income people, and 23 million Americans overall.

Senior Bishop Lawrence Reddick III, presiding bishop for Christian Methodist Episcopal Church, shared his concern that Americans “still are people who must decide between food or medicine, rent or food.”

Rev. Dr. Leslie Copeland Tune, director of the Ecumenical Poverty Initiative, said: “Budgets are moral documents that reflect our values, what does this budget say about us? That we are spiritually bankrupt and headed for moral ruin.” Copeland Tune criticized the budget for cutting programs that were “proven to move people out of poverty.” Job training, housing vouchers, and disability insurance were among the programs she mentioned.

Churches and food banks are often the types of places individuals turn to in times of need, especially when it comes to feeding their families. However, our country’s religious congregations would have to add $714,000 to their annual budgets each year for the next decade to make up for the drastic cuts found in the president’s proposed budget, according to a Bread for the World analysis.

“One trillion dollars will be cut from Medicaid alone,” explained Rev. David Beckmann, Bread’s president. “There will be more disease, more disabled people, and quite a few people will die.”

Andrew Frey is a summer communication intern at Bread for the World.

Speakers offered stern statements as to why as Christians it is their duty to oppose deep cuts to programs that would hurt hungry and poor people.