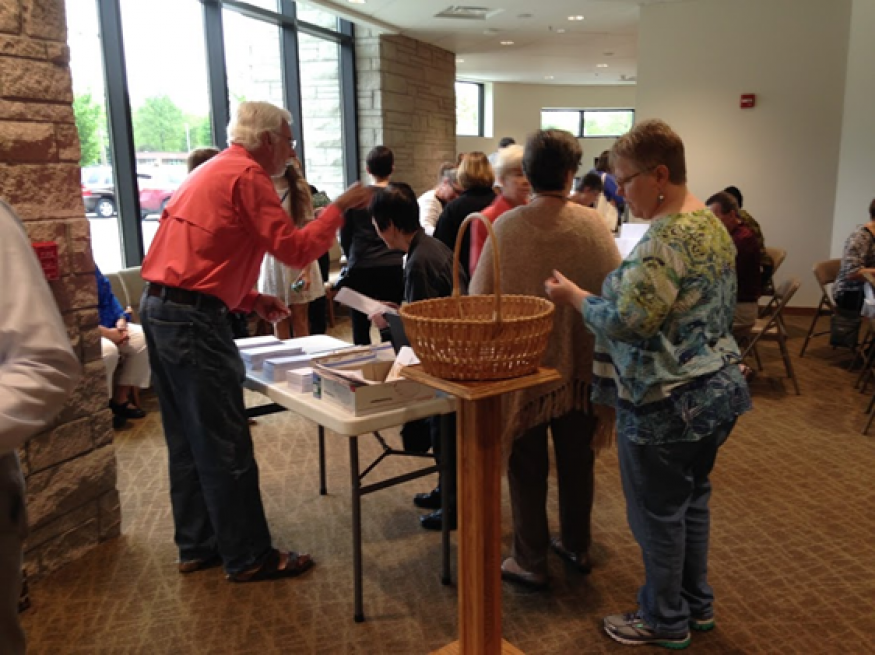 Each year, Bread for the World Offerings of Letters take place in nursing homes, workplaces, homes of women religious, and in churches large and small. Three churches in different parts of the country provide examples and inspirations for your own church’s letter-writing event in the months ahead.

This year marks the fourth Offering of Letters at Resurrection Lutheran Church, Indianapolis, Indiana. Jana Forster leads the effort in this ELCA church on the city’s south side, near the suburb of Greenwood.

Bread for the World’s mission strikes a deep chord within Jana. “I learned the gift of citizenship can be used to help the world, which has plenty of food to feed everyone. It’s a distribution problem.”

That first year Jana organized a letter-writing event at Resurrection, she strung 12 bags across the front of the church. “I told the church members each represented a food provision effort in our county,” she says. “I then asked, ‘How many of these bags do you think are funded by individuals, churches, and businesses, and how many by the government?’ Most guessed that 7 out of 12 were provided by private sources.”

“I said that just one bag was covered by private sources,” Jana says. “The rest needed government funding. And if that funding was cut, would the private sources cover the gap? A small voice at the back of the church offered, ‘No.’ I continued that that is why we need to ensure that our government keeps helping.”

Jana reports that Rev. David Schreiber, the church’s lead pastor, preaches a “phenomenal sermon” on why Christians are called to act to help poor and hungry people. A five-person team sets up colorful displays. Church members are given envelopes addressed to the two senators and one representative. “We all lead stressful lives, and everyone is so busy,” Jana says. “We make it as easy as possible for people to participate.”

This year, Resurrection Lutheran Church is joining with 24 other churches in an ecumenical Offerings of Letters. Each church will hold its own Offering of Letters, but the offerings will be linked in a single campaign. The aim is that all of the letters will be written and gathered to be hand-delivered to their local offices before Lobby Day.

2017 will mark Heather’s third annual Offering of Letters at Westminster. The church’s Justice and Peace Committee organizes the event.

“We give people lots of notice in the weeks leading up to the Offering of Letters,” Heather reports. “We’ve also created display maps of the districts of our members of Congress. We really like for letters to be hand-addressed, and for writers to add personal notes.”

“When the sermon ties to the call we have as Christians to act, it is truly powerful,” Heather says.

The week after the activity, the Justice and Peace Committee brings the collected letters forward in baskets as an offering. A prayer is conducted over the letters. The next week, committee members hand-deliver the letters to their local representatives’ offices.

“Since November’s election, we’ve had a lot of interest from parishioners who want to take concrete action to help others,” Heather says. “Grand Rapids has a sizable refugee community. We’re working with Bethany Christian services on ways to get involved. We must work across the aisle to ensure people’s well-being.”

This will be the 13th year that Epworth United Methodist Church in Durham, North Carolina, has conducted an Offering of Letters. Norma Mitchell, who leads the church’s effort, first became a Bread member in Alabama in the 1970’s. When she and her husband Joseph moved to Durham after retirement, they were delighted to be invited to join the Bread group there.

The group met monthly in the early evenings at Urban Ministries, a homeless services agency in downtown Durham. “Hungry people were lining up to receive a donated evening meal,” Norma remembers. “We’d look into their eyes, speak with them as we approached the building. It really brought home the reality of what the Offering of Letters aims to do.”

Epworth UMC has 900 members and hosts three services each Sunday. Norma reports that church members are “extremely involved” in local service activities serving poor and hungry people. These activities are balanced by the Offering of Letters and Bread for the World Sunday.

Norma and her partners announce the Offering of Letters at least two Sundays before the actual event. The activity also appears in the church’s newsletter. Epworth’s pastor, Rev. Karen Whitaker, makes time for Norma or another member of the church’s Outreach Committee to introduce the concept in worship services.

Informative posters, sample letters, and postage stamps are all made available after the service. “You have to keep educating on the importance of legislative advocacy,” Norma says. When someone says the Offering of Letters is “too political,” Norma counters that any action we take — including inaction — has a political effect.

Each year, Bread for the World Offerings of Letters take place in nursing homes, workplaces, homes of women religious, and in churches large and small.