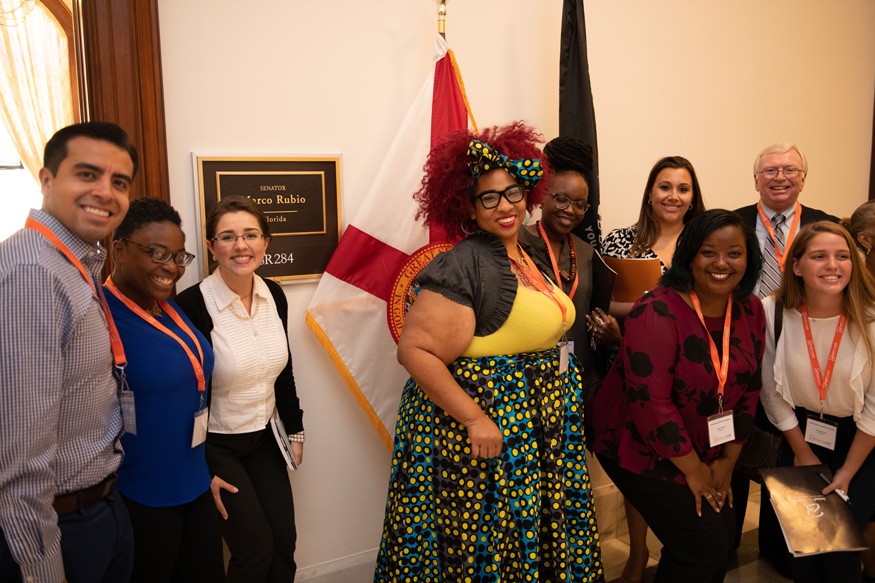 Tiffany Kelly understands the struggle of hunger and poverty. When she was young, there were times she looked in her refrigerator wondering what she would eat.

“The food in there wasn’t filling, nutritious or balanced,” she said.

Today, she keeps her refrigerator well-stocked but not for herself. Rather, her freezer is filled with extra food for others. “I can’t sleep at night knowing there are hungry people around me,” said Kelly, who lives in Orlando, Florida. “I have that extra food in case I see that family that needs something or have fallen on hard times.”

Kelly was one of more than 300 Bread activists who came to Washington, D.C., in June as part of Bread for the World’s 2018 Advocacy Summit and Lobby Day. She came to add her voice to the many who are working tirelessly to ensure an end to hunger.

“I came to lobby day because I was struck by the efforts of Bread for the World and how focused they are on the one issue we should not have in our country,” she said.

Kelly learned about Bread for the World at an End Hunger conference where she spoke as a panelist and was asked to attend the event.

Aside from ending hunger, Kelly is also passionate about eliminating poverty. She works with Circles USA in Orange County, Florida as a Circles Coach at St. Luke’s United Methodist Church. Circles is a community-based initiative that helps end poverty by increasing household income, reducing debt, and building social capital.

Kelly said she left Lobby Day feeling more inspired to continue the work she does in her community. She was particularly impressed with Bread’s diverse group of activists.

“I came back from lobby day believing that if we are consistent and united, then we can make anything happen in this country,” she said. “It takes the oppressed and allies to change our world.”

She added: “It was really encouraging to see everybody represented. Men, women, Latinos, Pan-Africans, and many others. That’s how we end hunger.”

Puja Basnet was a recent communication intern at Bread for the World.