Faithful on the front lines 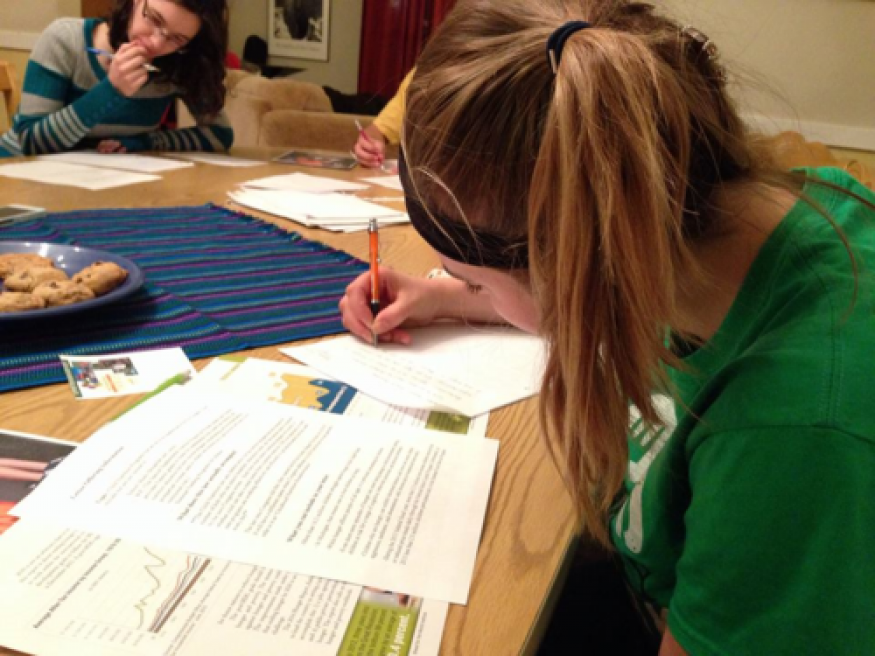 A few days before Thanksgiving, the Food Recovery Network at Calvin College, as well as many other hunger-focused groups on campus, gathered and decided to host a Bread for the World Offering of Letters.

Our purpose was to get students to write letters to our Michigan lawmakers, including U.S. Sen. Debbie Stabenow, the state’s junior senator. As the chairwoman of the Senate Agriculture Committee, Stabenow is a critical voice when it comes to making laws that can help end hunger. The committee has jurisdiction over SNAP (formerly food stamps).

At Calvin College, students involved with the Food Recovery Network retrieve leftover food from the dining hall and donate it to local food banks or church congregations that serve nightly meals.

With last spring being our first semester recovering food, my leadership team and I wanted to be more intentional about seeking food justice at the systemic level. Calvin students are beginning to do this by watching documentaries, such as A Place at the Table, and writing letters.

I got involved with food justice because I was utterly fed up with the way in which people who are struggling financially are treated in this country, especially those who benefit from SNAP. We have brothers and sisters here in Grand Rapids who not only do not have the financial capital to purchase groceries, but also live in areas where grocery stores are scarce.

I have a friend who has a sticker on her laptop, one that inspires me. It’s a quote from William Wilberforce, the English politician and abolitionist. It reads: “You may choose to look the other way but you can never again say that you did not know.”

Those involved with the Food Recovery Network at Calvin College can no longer say that we did not know. We no longer have the luxury of living in ignorant bliss. Instead, we  have been called to live faithfully on the front lines of food justice, fighting the cause  in this country and throughout the world.

And we will do it one plate of mashed potatoes and one handwritten letter at a time.

Cameron Kritikos is a sophomore at Calvin College in Grand Rapids, Mich. He is studying international development, Spanish, and church-based community development.