Five things you need to know about sequestration Sequestration was never meant to be the law of the land. In fact, the proposal to cap discretionary funding in the federal government's budget was meant to be so unsavory that it would force members of Congress to negotiate a responsible solution to deficit reduction. In 2011, they failed to reach an agreement.

Sequestration is a choice - a choice that can be changed when Congress negotiates funding levels for the fiscal year 2016 budget on their return from recess.

Budgeting by fiat has gone on far too long.

Sequestration shrinks the overall size of the federal pie (the total amount the government has to spend), putting many anti-poverty programs at risk. Since 2011, the automatic caps have dictated the federal budgeting process, with the exception of two years of relief with the Ryan-Murray deal. But unless Congress acts, additional cuts will return in the fiscal year 2016 and continue through 2021.

Sequestration will cut non-defense appropriated programs, such as the Supplemental Nutrition Assistance Program for Women, Infants, and Children (WIC), Head Start, Feed the Future, and other important nutrition programs by $37 billion each year through 2021.

Here are five things you need to know about sequestration.

Contact your members of Congress today, and tell them to replace sequestration and pass a budget that funds programs that help low-income families.  To learn more about sequestration, read The Consequences of Sequestration and Tight Budget Caps.

Photo: In 2013, nearly 70 percent of Meals on Wheels programs had to drop the number of meals they served to poor seniors as a consequence of sequestration.

Sequestration is a choice - a choice that can be changed by Congress. 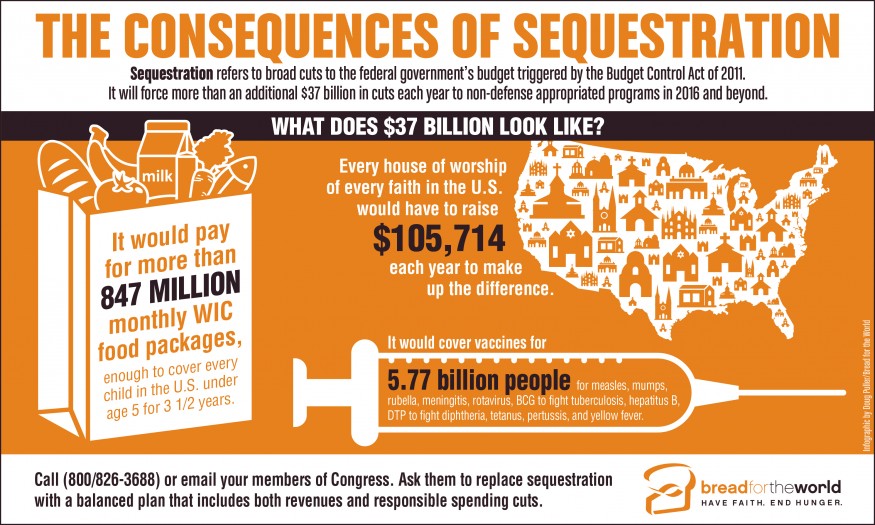