On the Frontiers of Hope in Honduras 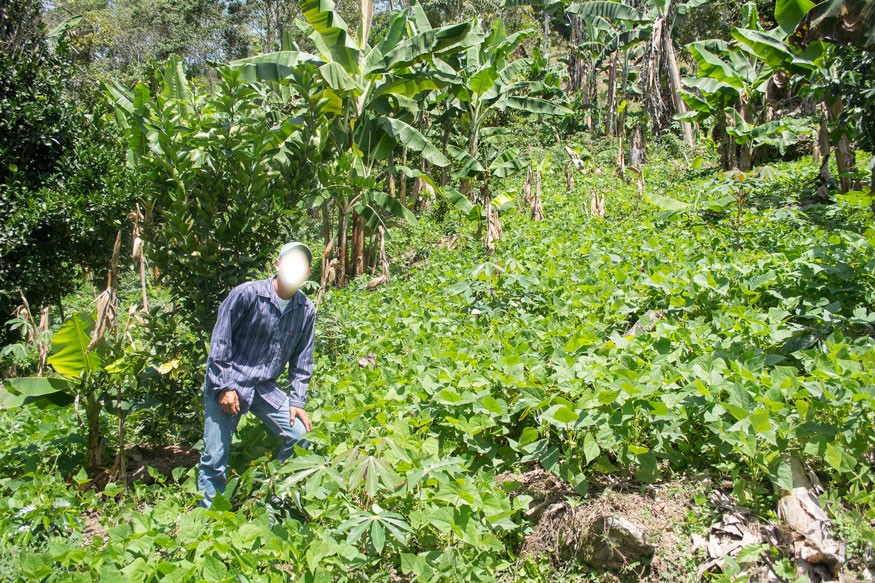 Growing Hope Globally is an organization founded by U.S. farmers that provides support for smallholder farmers around the world. “Our mission is to help hungry people know the dignity of helping themselves achieve food security,” says Max Finberg, president of Growing Hope Globally (and former Bread staffer).

“We connect U.S. farmers with farmers overseas just trying to feed their families,” says Finberg. “By donating a portion of the proceeds of their harvest, farmers in the United States fund agricultural development programs in Africa, Asia, and Latin America.”

This includes training in sustainable agricultural practices such as soil conservation and diversified cropping. One of the beneficiaries is Miguel1 a smallholder farmer from a region known as the Dry Corridor in Honduras.

In 2012, Miguel participated in a training program. He was a quick study, and his farm soon became much more productive. 2014 was a rough year for many farmers in the Dry Corridor. There was a severe drought, and to add to their troubles, the coffee crop—their main source of income—was wiped out by a highly contagious fungus. Because he had diversified his crops, Miguel’s family had enough food for themselves and were able to offer some to their neighbors.

Neighbors began to come to Miguel for advice on farming, so he established his own training program on Saturdays. His status in the community made him a natural choice to lead their local water committee, and Growing Hope Globally helped by providing training in advocacy and negotiating with local officials.

2014 produced waves of undocumented migrants from Central America to the United States. Hunger resulting from the drought and destruction of the coffee crop were two of the main drivers. Meanwhile, Growing Hope Globally invited Miguel to come to the United States and testify to the value of the training he received. On the issue of migration, he said, “If my family feels secure, and my kids have enough to eat, and I earn enough so they can attend school, then why would I want to leave? But I tell you, if we don’t feel secure, and we don’t have enough to eat, then no wall is big enough to keep us out.”

In 2017, the water committee that Miguel led angered a wealthy landowner who was not accustomed to sharing water resources with smallholder farmers, many of whom he employed as laborers in his fields. The law on water rights was not on the landowner’s side, so he hired some men to intimidate Miguel. The text messages Miguel received from the landowner’s men got more menacing, until eventually they threatened to kill him.

Miguel and his family had no choice but to flee their home and move to another part of the country. Life was much harder there, and he earned barely enough to survive. The statement he made earlier about security and feeding his children ironically had come true, and there was no option but to head north for the United States. That was in 2018. One year later he used the earnings he had saved from his landscaping job to pay traffickers to smuggle the rest of the family out of Honduras. They are living in the United States now. While they are not thriving, they feel secure, and Miguel is earning enough to keep the family from going hungry.

Alex Morse is Growing Hope Globally’s regional director for projects in South and Central America. He has known Miguel since 2012 and has watched this whole story unfold. He recalls the first time he met the family, and it was clear that the children—a 7-year-old boy and a 5-year-old girl, at the time—were in poor health and malnourished. Two years later, after Miguel had incorporated the training he received and the farm’s productivity increased, the children were energetic and playful, like one would expect of healthy children.

“What saddens me most about what happened to Miguel,” says Morse, “is here’s a guy who did everything possible to help himself and improve his community but look at what choices he had to make.”

Growing Hope Globally invites its donors in the United States to visit projects they are supporting around the world and meet the beneficiaries. In April 2019, Morse led a trip to Honduras for a handful of the donors. Gary Gensch, a farmer in Michigan, joined that trip, in part, because he wanted to learn for himself what was driving so many people to migrate from Central America to the United States. At one point, Morse recalls, Gensch was brought to tears when he saw the struggles the communities face, whether they be climate conditions, lawlessness and violence, or grinding poverty.

Despite the difficulties he has faced, Miguel has faith that one day it will be safe enough for the family to return to Honduras. Then they will rejoin their community, and he will resume farming. He is still grateful for all the support he received from Growing Hope Globally and for what other organizations are doing to improve Central America.

“To all of my brothers and sisters in Central America,” he says, simply, “Have faith.”

"To my brothers and sisters in Central America,” Miguel says, simply,
"Have faith"

1  Miguel is using a pseudonym to protect himself and his family.