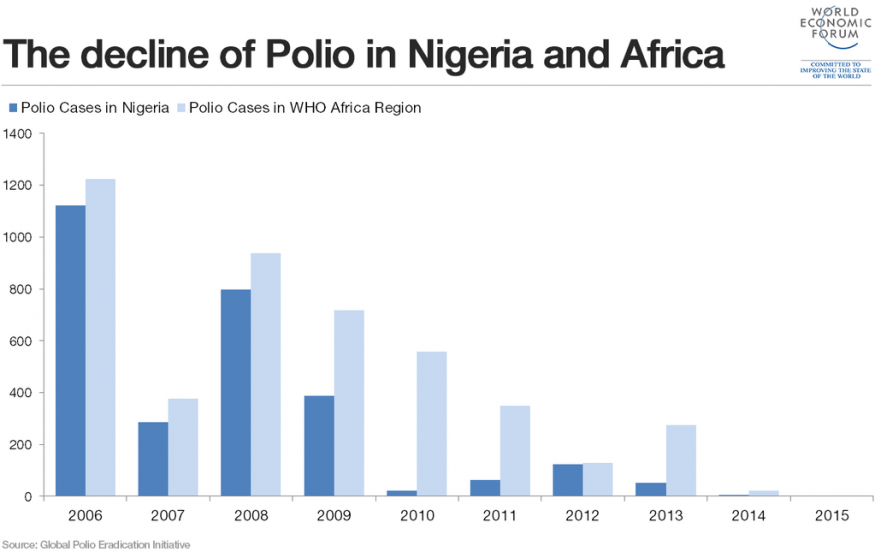 Earlier this year, we reported that Africa had gone six months without a case of wild polio.  The continent is now celebrating the first anniversary of its last recorded case (a toddler in the Puntland region of northern Somalia, who had received his first immunization but missed later ones).

Nigeria was the final key to reducing polio cases to zero. It was one of the "final four" countries where the virus was endemic. Twice, the polio virus was re-introduced into Somalia from Nigeria after polio-free periods as long as six years.

The World Health Organization does not certify that polio has been eradicated on a continent until there have been no new cases for three years, so Africa will not celebrate that final victory until early 2018. But the first year is the most challenging of the three.

African countries overcame daunting obstacles to reach this point, including:

Polio, like other deadly diseases, is more dangerous to children who are malnourished. The majority of hunger-related deaths are caused by diseases that attack people with immune systems weakened by malnutrition. Most of those who die of polio are younger than 5.

Eradicating polio would save the world $40 billion to $50 billion in the two decades following eradication. This is money that could be spent on ending hunger and extreme poverty. Most of the savings -- 85 percent -- would be in low-income countries.

"With Africa now on track, we are left with only two countries where polio transmission has never been interrupted: Pakistan and Afghanistan," said Peter Crowley, polio chief for UNICEF, the United Nations Children's Fund. "Here too, despite enormous challenges, communities, governments and partners are working with courage and determination to end polio once and for all."