Speakers, panelists spark advocacy on needs of women and children 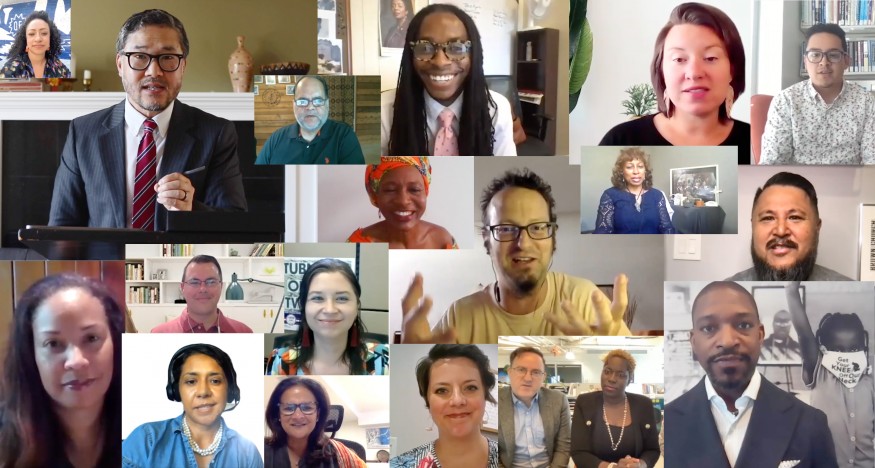 Rev. Dr. Starsky Wilson, president and CEO of the Children’s Defense Fund, set the stage for Bread’s 2021 Virtual Advocacy Summit: Invest in Children, Transform the Future by reciting a passage from the Book of Isaiah: “This day is a day of distress and rebuke and disgrace, as when children come to the moment of birth and there is no strength to deliver them.”

These words, spoken by King Hezekiah of Judah when his kingdom was in crisis, echo the moment we find ourselves in today, said Wilson. With one in seven children in America living in a food insecure home, “this is a time of distress and rebuke and, indeed, disgrace,” he explained, “and yet, we have found in it an awareness of possibility.”

As Congress works on funding bills and a once-in-a-generation infrastructure package this summer, the country has a unique opportunity to make lasting impact on child poverty. The question now, says Wilson, is whether we will have the strength to deliver the necessary changes.

Hundreds of people logged on to attend Bread’s second-ever Virtual Advocacy Summit on July 12 and 13, which included two days of online sessions, determined to do their part to end hunger. Prior to 2020, Bread activists gathered annually in Washington, D.C., to urge lawmakers to oppose budget cuts that increase poverty and hunger, in addition to supporting programs that boost food security in the United States and around the world.

With in-person discussions at congressional offices still off the table due to COVID-19, members from around the country gathered virtually to learn about legislative priorities in preparation for virtual meetings with their members of Congress in August.

“When over 270-million people around the world are at the brink of starvation, this is the moment when we must step forward, lean in, and continue to advocate for those who experience hunger and poverty,” said Bread President Eugene Cho, noting that U.S. childhood hunger quadrupled during the pandemic.

During the Legislative Briefing, Bread encouraged activists to ask their elected officials to increase global nutrition funding to $300 million for the 2022 Foreign Operations and Related Agencies Appropriations Act and to combat hunger and poverty at home by adopting a 1,000-days infrastructure plan.

The domestic plan—named for the 1,000-day window between a women’s pregnancy and her child’s second birthday, which is a critical time for getting the right nutrition—would permanently expand the Child Tax Credit, expand paid family/medical leave, waive recertification requirements in Medicaid and WIC (Women, Infants, and Children), expand childcare, and include all provisions of the Black Maternal Health Momnibus Act of 2021.

“Investing in children during this crucial period yields lifelong returns,” said Bread’s Domestic Policy Analyst, Sergio Mata-Cisneros, during a summit panel discussion. “This is why some of the world’s leading economists have called for more significant investment in nutrition and wellbeing of mothers and infants and toddlers during this 1,000-day period.”

One of Bread’s top legislative priorities is a permanent expansion of the Child Tax Credit. Intended to help the U.S. economy recover from COVID-19, the American Rescue Plan temporarily expanded the credit for 2021, giving parents an additional $1,000 to $1,600 per child for the year, paid in monthly installments. Permanently expanding this credit could cut child poverty nearly in half and “would do more to reduce hunger and poverty among our nation’s children than any single policy has in decades,” according to Mata-Cisneros.

“Seeing the 1,000-day agenda was exciting,” said attendee Mandelyn Cloninger, chief impact officer for the Feeding Tampa Bay food bank. “Bread for the World has been a great advocacy platform for me to engage with, both personally and professionally. It gives me a lens to be forward-thinking about where we might go as an organization.”

“It’s a great issue because it really cuts across all political differences. How can you be against motherhood and apple pie?” said Marty Toepke-Floyd a United Methodist pastor who attended the summit from Jamestown, North Dakota.

Toepke-Floyd, who recently became a grandfather, wrote to ask his elected officials to prioritize the needs of pregnant women and young children in the next funding bill and upcoming infrastructure plan.

Organizers urged attendees to reach out to their members of Congress by writing letters and emails, calling their offices, tagging them on social media, and even scheduling virtual meetings. On the final day of the summit, Bread members joined regional Zoom meetings to connect and share ideas with other anti-hunger advocates in their states and neighboring states.

During the Latino Leaders Convening and Pan African Consultation, organizers called out the inequitable policies that contribute to hunger and poverty among people of color, especially as the world continues to face challenges due to COVID-19. Through prayer, breakout groups, and policy presentations, attendees gained knowledge and spiritual motivation to advocate for justice and equality in their communities and abroad.

“The disciples say to Jesus, ‘you need to feed these people,’ and they are relying totally on Jesus … and Jesus says right back to them, ‘you need to feed the people,’” said Claiborne. “One of the biggest mysteries of our faith is that, for some wild reason, God does not want to change the world without us.”

On the final day of the summit, Bread members joined regional Zoom meetings to connect and share ideas with other anti-hunger advocates in their states and neighboring states.