Strengthening the agricultural marketplace in Nepal 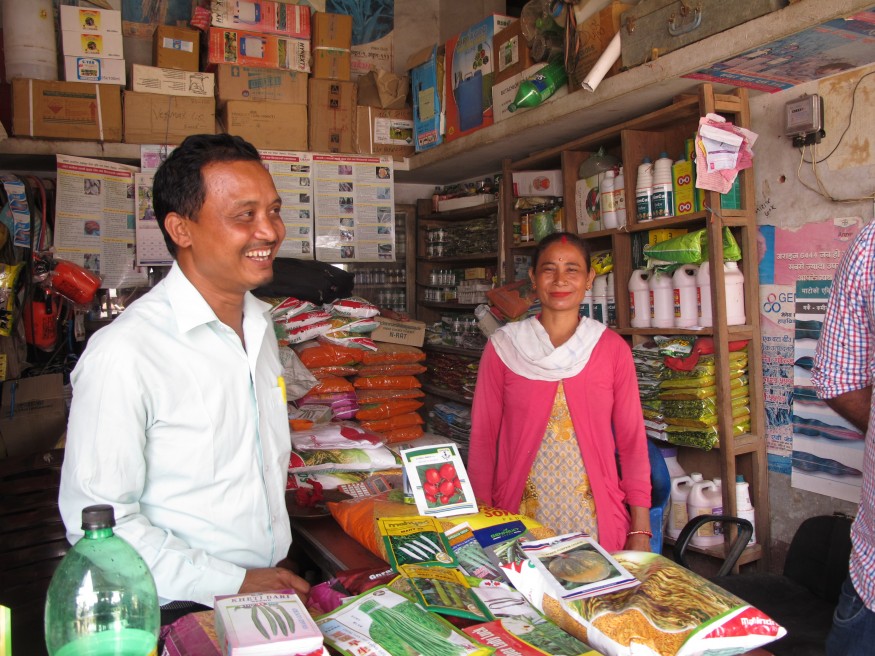 Jokhan Chaudhary, proprietor of Milan Agrovet in Nepal’s Bardiya District, started his retail business 21 years ago with the goal of supporting the local agriculture sector. In addition to selling agricultural inputs such as seeds, fertilizers, and pesticides, Milan Agrovet provides technical services, such as training and guidance on agricultural techniques, to local farmers.

From 2012 to 2017, Feed the Future, the U.S. government’s flagship nutrition program, supported a program called Knowledge-Based Integrated Sustainable Agriculture in Nepal (KISAN). KISAN, Feed the Future’s main investment in Nepal, was implemented by Winrock International. KISAN offered services such as business skills trainings, meetings to enable private sector agricultural enterprises to coordinate their work, and a series of workshops. Among the workshop participants was Jokhan Chaudhary, who credits the training with enabling him to build relationships with other retailers and wholesale suppliers and to improve his business practices.

Jokhan used his KISAN training to begin offering technical services to his customers to raise their agricultural productivity. In response to farmers’ needs, he offered information on using strengthened seed varieties, mulching, plant protection, and other techniques that together are known as “improved” agricultural practices. He reports that offering technical services helped him build closer relationships with his customers and attract more customers.

KISAN’s support for Milan Agrovet benefited both Jokhan as a business owner and local farmers. Milan Agrovet expanded its customer base from 500 to 2,500 farmers, and increased its annual sales fivefold as well. Many of the farmers served by Milan Agrovet have increased their incomes. For example, after receiving technical services from Milan Agrovet, a farmer named Rajkuman began growing vegetables in addition to staple cereals. Now, he no longer has to identify ways to earn supplemental income off the farm; instead, vegetable sales add to his income during the “off-season” after the cereal harvest.

The goals of Feed the Future include enabling countries to strengthen their economies by expanding and improving their agriculture sectors, to improve nutrition among women and children, and to help communities build resilience for future challenges. KISAN’s support for Milan Agrovet contributed to all three. But Nepal and other countries still have a journey ahead of them to equip themselves to feed and nourish their people and to move toward “graduating” from development assistance. Feed the Future is one key player in supporting countries and communities on the road to self-reliance.

Jordan Teague is international policy analyst with Bread for the World Institute.

Feed the Future is one key player in supporting countries and communities on the road to self-reliance.