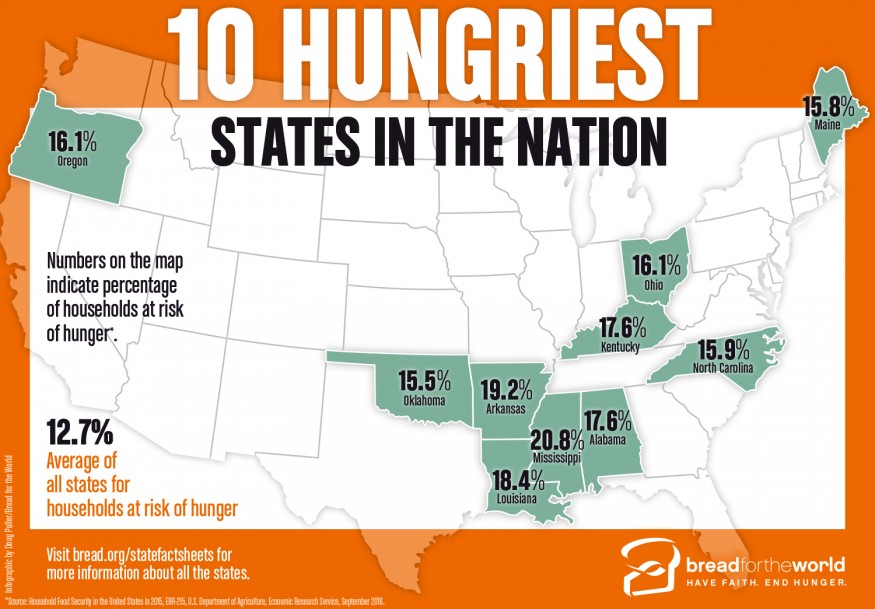 Based on data from 2016, the 10 hungriest states in the U.S. are, in order, beginning with the hungriest: Mississippi; Arkansas; Louisiana; Alabama and Kentucky (tie); Ohio and Oregon (tie); North Carolina; Maine; and Oklahoma.

“The United States and the world have made substantial progress against hunger and poverty over the last several decades,” said Rev. David Beckmann, president of Bread for the World. “Yet this data shows that we still have a long way to go. Elected officials must support programs and policies that strengthen families and make it easier for people to work.”

Bread’s analysis found that the best way to end hunger is with a good, family-sustaining job. Any new bills and programs considered by Congress must put the needs of vulnerable families and communities first.

Likewise, any tax reform legislation should strengthen earned income and child tax credits to ensure that low-income workers and families are not taxed into poverty. Lawmakers must also protect safety-net programs that help families struggling to make ends meet -- such as SNAP (formerly food stamps), WIC, and Medicaid.