Racially Equitable Responses to Hunger During COVID-19 and Beyond 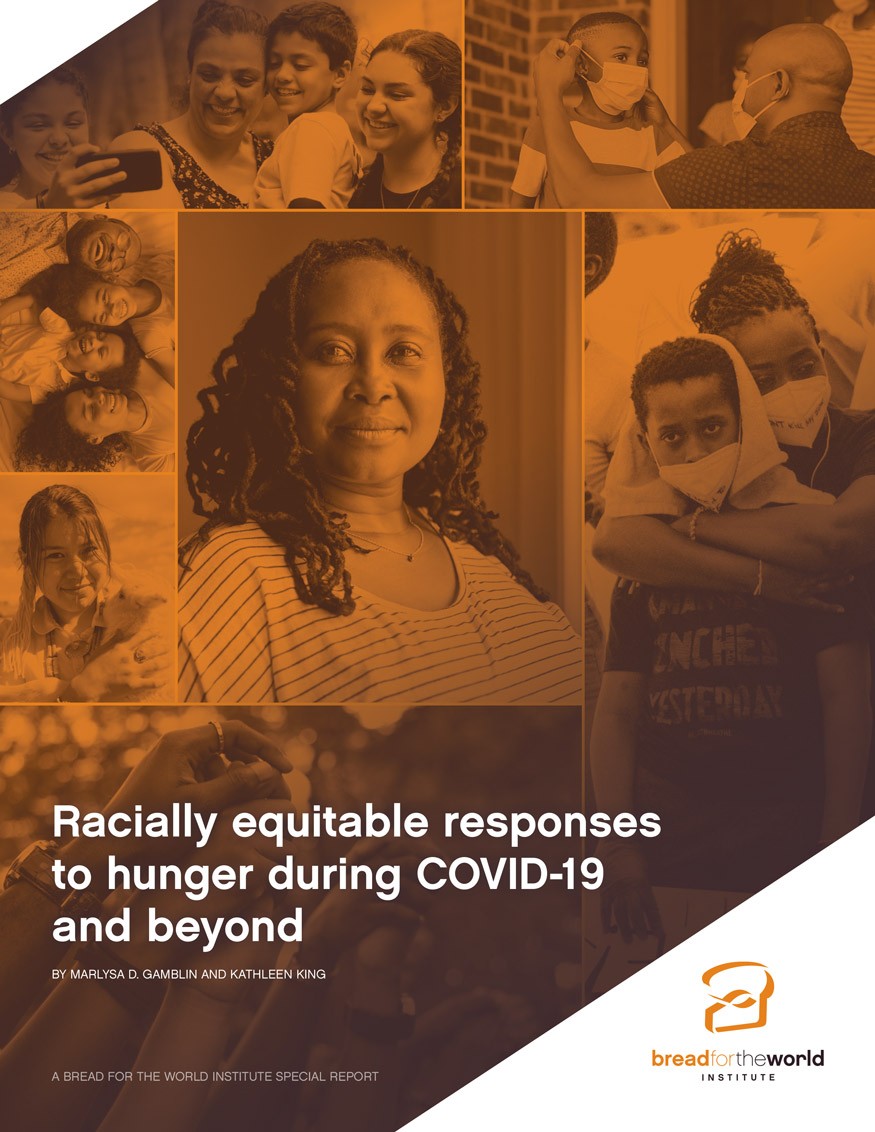 New Report: Since the pandemic began, Latino/a and Black households are twice as likely to report being food insecure as white households.

The U.S. Department of Agriculture defines food insecurity as when a person or household does not have regular, reliable access to the foods needed for good health. Black, Indigenous, and Other People of Color (BIPOC) have historically had higher rates of food insecurity in the United States as a result of structural racism. Policies that reflect structural racism date back to the 1400s with the colonialization of Indigenous land and genocide of Indigenous people, followed by the enslavement of people of African descent, and continuing to this day.

Structural racism is a historical, cultural, institutional, and interpersonal system of hierarchy that routinely advantages white people, leading to cumulative and chronic racial inequities in all aspects of life for BIPOC, including food security.

Food insecurity and COVID-19 have a reciprocal relationship. Food insecurity compromises immune systems and creates health inequities, which increase the susceptibility to death among people who contract the virus. The racial food insecurity and health inequities created by structural racism among Black, Indigenous, and Other Households of Color contribute to the higher death rates among BIPOC who contract the virus. The reverse is also true: higher rates of contracting COVID-19 and dying from it increase food insecurity, since workers are more likely to have to take extended time off—usually unpaid—because either they or their family members are sick. At the same time, COVID-19 generates large, unexpected healthcare costs for Black, Indigenous, and Other Patients of Color, who are also more likely to lack health insurance. The death of a wage earner adds to the likelihood of food insecurity for his or her family members, often for many years.

The racial divides in food insecurity, coupled with the higher rates of exposure, infection, and death from COVID-19 among Black, Indigenous, and Other People of Color, point to the urgent need for the United States to make racial equity a top priority in efforts to contain COVID-19 and its widespread impacts. Racial equity is a process focused on centering and respecting the needs, power, and leadership of BIPOC, and a goal of achieving equal, and ultimately optimal, outcomes for BIPOC relative to their white counterparts.

Not long after COVID-19 arrived in the United States, it became clear to all that race played a major role in determining how likely people are to contract the virus and how likely they are to die if they get sick. Thus far, Black communities have had the highest COVID-19 death rate of any racial or ethnic group, followed by Indigenous people. This finding is consistent whether the data is at the county, state, or national level. According to the Color of Coronavirus Project, the death rates per 100,000 people in each group are 80 Black people, 67 Indigenous people, 59 Pacific Islanders, and 46 Latino/as, compared to 36 white people. When death rates are adjusted for age—to take into account that white people Food insecurity and COVID-19 have a reciprocal relationship. who die are on average significantly older than Black, Indigenous and Other People of Color who die—BIPOC are three times as likely to die as whites in their age group.

In response, this report discusses the unique impacts of both COVID-19 and factors that increase hunger in Black communities in the context of anti-Black racism, which is the root cause of these racially inequitable impacts. Anti-Black racism specifically targets the well-being of Black people. Racism against Black communities is an important specific type of racism because it informed the creation of structural racism in the United States, which began with slavery and continued with legal lynchings, physical abuse, and other forms of violence against Black bodies.

The report also explains why it is important to apply a racial equity lens to U.S. COVID-19 responses that centers Blackness (see figure 1) to reduce food insecurity and poverty. Practicing racial equity by centering Blackness can begin the process of repair from the policies that previously inflicted harm on Black communities, as shown in the graphic below, as well as on other communities of color that historically have also been harmed by these policies and practices.

The report also explains why, in centering Blackness, it is critical to center the needs, voices, and leadership of Black women, who experience the dual oppression of anti-Black racism and gender inequity. Centering the intersections of these two interwoven identities in our racial equity approach is a way of avoiding a focus solely on the experiences of Black men. Rather, the entire Black community is uplifted, and by extension, all other women, men, and children of color experience liberation, and more specifically, food security.

For this reason, the report’s analysis and recommendations have been informed, led, and guided by Black women who are experts through lived experience, as on-the-ground leaders, practitioners, or scholars from across the country and from different fields.

Marlysa D. Gamblin is the Senior Policy Advisor for Racial and Gender Divides at Bread for the World Institute. Dr. Kathleen King is the President of Mosaic Economic Consulting, LLC.

Food insecurity and COVID-19 have a reciprocal relationship