After the Election: Freshman orientation 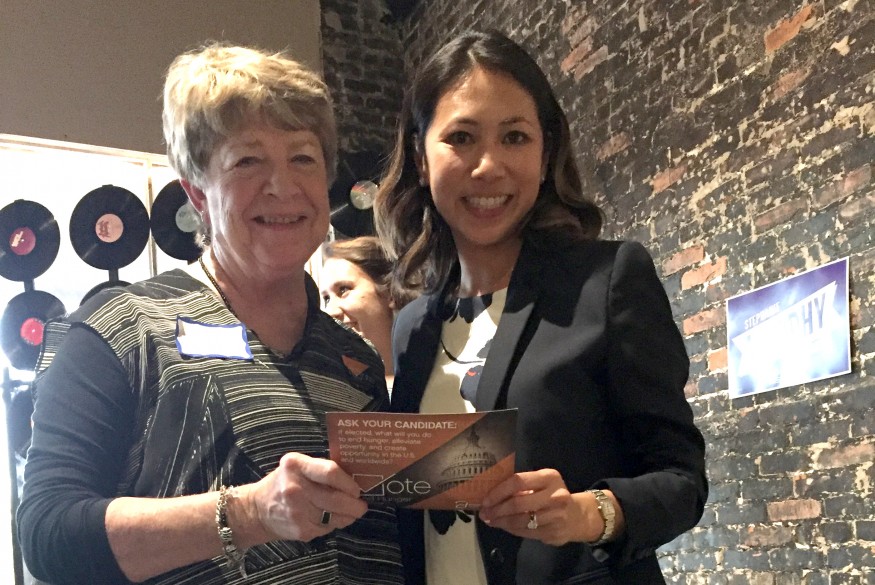 With the ballots now counted, a newly elected 115th Congress will take its seat in January. Included in the freshman group of legislators is Democrat Stephanie Murphy from Florida, the first Vietnamese-American woman elected to Congress.

Bread for the World’s members met with Murphy on the campaign trail last month at part of our I Vote to End Hunger campaign.  Murphy unseated incumbent Republican John Mica in the U.S. Congressional District 7 race in Florida. He had held the seat for 23 years.

Central Florida’s Bread for the World team is very active in their community, but when it came to securing meetings with either candidate, they were striking out. Undeterred, Rebeekah Richey and three other Bread members showed up at an Oct. 5 meet-and-greet with Murphy in downtown Sanford to ask her how she would end hunger if elected.

Florida is the 25th hungriest state in the country and home to roughly 9 percent of the nation’s immigrants. Immigrant families have disproportionality higher rates of food-insecurity and poverty. The national poverty rate is 14.8 percent, while immigrants, as a group, have a poverty rate of 30 percent.

Richey was able to get a moment alone with Murphy to talk about the issues she and the local team members were advocating for, such as comprehensive immigration reform.

"I was encouraged by her openness to talk about hunger and poverty and the solutions we want to see on these issues,” Richey said.

Murphy told Richey that she understood the problem of poverty and the need for immigration reform given the fact that she herself was an immigrant and grew up in a blue-collar household. Murphy was 1 years old when she came to the U.S. with her family as a refugee.

It is likely that Murphy will vote on some form of immigration policy as part of the 115th Congress. Bread’s analysis shows that comprehensive immigration reform with a path to citizenship would help reduce hunger.

Murphy’s campaign made a commitment that if she won the seat, she would meet with the team again. The next step for the Florida team is to hold Murphy to that promise.

Now is the best time to reach out to freshman and orient them to the issues that will end hunger. Remind them of what is at stake for their most vulnerable constituents when they take their seats as our nation’s most powerful decision makers.

Pedro Cruz is a national organizer at Bread for the World.

Bread for the World’s members met with Murphy on the campaign trail last month at part of our I Vote to End Hunger campaign.