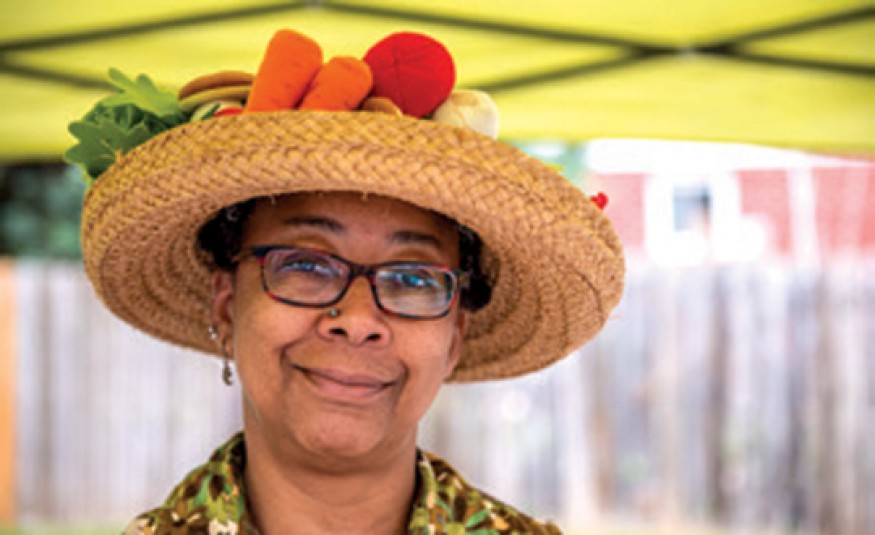 JuJu Harris was in the Peace Corps and stationed in Paraguay when a boll weevil infestation destroyed the country’s entire cotton crop. Her work involved helping farmers choose and plant other crops, mostly fruits and vegetables. She noticed that these new foods clearly improved the health of women and children in the villages—an observation that would serve her well after her return home.

Harris got married once she returned to the United States and became pregnant soon thereafter. As the mother of an infant, she suffered from postpartum depression, as do about one in seven new mothers. She was also eligible for WIC, the federal nutrition program for low-income women, infants, and
children. As it turns out, these two facts were connected: research has shown that low-income women, those who are eligible for WIC, are 65 percent more likely to experience PPD than others.

Harris now works as a birth and postpartum doula in Washington, D.C. One of a doula’s main responsibilities is to provide support to expectant and new mothers, and Harris’s specialty is nutrition education. She works with low-income women, teaching them how to plan meals and shop for foods on a budget and explaining what to eat to keep themselves and their babies healthy.

The best nutrition for infants is exclusive breastfeeding (meaning no water, formula, or other foods) for the first six months. However, this is difficult or impossible for most workers in the United States, particularly workers in low-wage jobs, since they are less likely to have even a few days of paid sick leave.

The Family and Medical Leave Act (FMLA), enacted in 1993, provides new mothers (and fathers) with up to 12 weeks of unpaid leave each year. But not everyone qualifies for this unpaid leave: a parent must work for an employer with at least 50 employees located within a 75-mile radius of the workplace, and she or he must have worked for the employer for at least a year and for at least 1,250 hours (24 hours a week) during that week. The Trump administration’s 2018 budget request includes a proposal to extend six weeks of paid leave for new parents. This would be financed through the unemployment insurance (UI) system and shift most of the costs onto states whose UI programs are already underfunded.

Even if workers are eligible under the current FMLA, few can afford to take unpaid leave—if they do, their families may well go hungry, be evicted, or be unable to buy essential medications. Harris knows a retail worker who had no choice but to return to work one week after giving birth. “As soon as she came back to work she was expected to do the same work, standing on her feet all day,” Harris recalled. “You have to perform up to par, if not better, to prove you are a worthy employee.”

The best nutrition for infants is exclusive breastfeeding for the first six months. However, this is difficult or impossible for most workers in the United States.