Bread for the World Members Lobby Congress to End Hunger 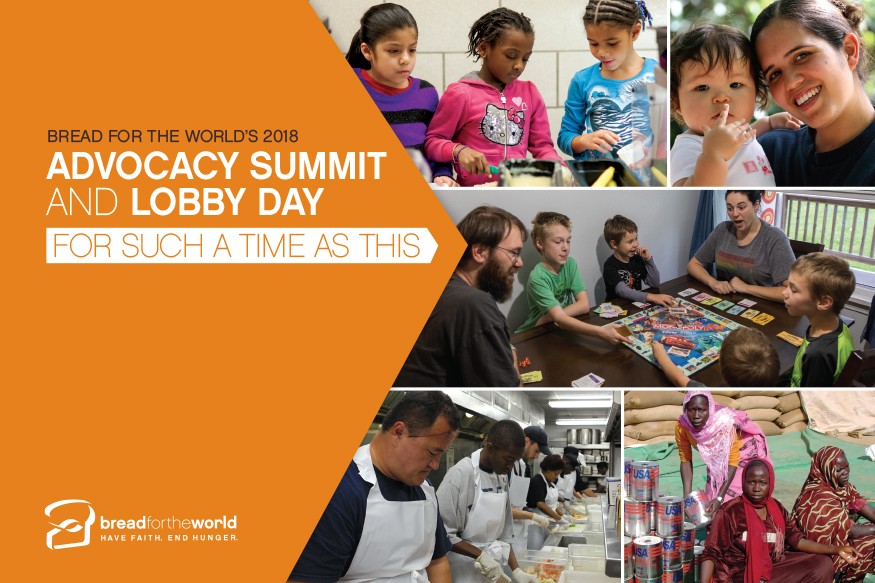 Washington, D.C. – Nearly 300 Bread for the World members and activists will visit Capitol Hill today to personally ask their members of Congress to support a bipartisan farm bill that protects nutrition assistance in the United States and improves international food aid, and to cosponsor and pass the Global Food Security Reauthorization Act.

The members and activists are participating in Bread’s 2018 Advocacy Summit and Lobby Day. This year’s theme is "For Such a Time as This." The theme is the same as Bread’s 2018 Offering of Letters, which is focused on urging Congress to make funding decisions that will end hunger by 2030.

“Bread members from across the country are on Capitol Hill to urge our congressional leaders to pass two pieces of legislation that will directly impact millions of hungry people in the U.S. and around the world,” said Rev. David Beckmann, president of Bread for the World. “We have an opportunity to put us on the path to end hunger.”

The farm bill is must-pass legislation that authorizes most U.S. agriculture and nutrition policies, as well as humanitarian relief programs. The current House of Representatives’ version of the bill would cut more than $17 billion in food assistance from the Supplemental Nutrition Assistance Program (SNAP).

The Senate farm bill continues bipartisan support of U.S. international food assistance programs and rejects the broad, sweeping cuts to domestic nutrition assistance that would harm kids, families, the elderly, and people with disabilities. The bill is expected to be marked up on Wednesday.

The Feed the Future programs authorized by the Global Food Security Act (GFSA) alleviate hunger and malnutrition in developing countries. These programs support smallholder farmers, strengthen agricultural businesses, and promote critical nutrition interventions for mothers and babies in the first 1,000 day window. The law will expire this year unless Congress acts.

“The U.S. government-funded Feed the Future programs, authorized by the GFSA, have achieved remarkable results against hunger and poverty. In Feed the Future focus countries, poverty rates have dropped by 19 percent, and 1.7 million more households are free from hunger. Congress must reauthorize this vital legislation,” Beckmann said.

This evening, Bread for the World will honor Sens. Todd Young (R-Ind.) and Jeff Merkley (D-Ore.), and Reps. Will Hurd (R-Tex.) and Alma Adams (D-N.C.) for their outstanding leadership toward ending hunger and poverty in the U.S. and around the world.